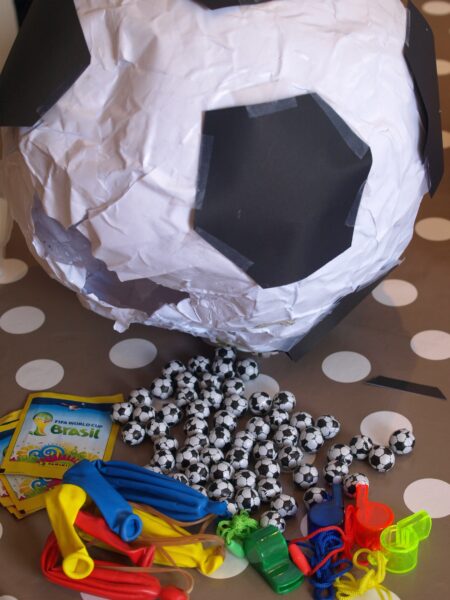 One of the things I was keen to make for our World Cup party was a Football Piñata. I’d never made a piñata before but we’ve had them at parties and the girls have always loved them.

We made the ball shape by blowing up a balloon and covering with paper mache. Instead of using newspaper we used normal printer paper, which meant we didn’t have to paint the ball and this saved us a step. It also meant the layer was thicker and so we only had to do one round of paper mache which really saved time.

Once the balloon is covered with paper we gave it a good coat of watered down glue and then left it over night.

We left a large hole in the bottom to put the treats in. Once dry we popped the balloon and then filled the piñata with treats. As it was the World Cup we put in football themed treats. Then I papered over the hole. We cut out some hexagons in b lack paper and taped them onto the ball. It would have been better to paint them but I ran out of time.

At the party we hung up the piñata in the garden and everyone had a turn to beat it. I was really pleased as it lasted through 7 children and a couple of adults. It was very good stress relief.

You do need to make sure everyone is standing well back but then you can give it some welly!

Once the piñata falls to the ground everyone can scramble to get the treats.

They were all very happy with their swag – although I was regretting those whistles pretty quickly as were our neighbours!