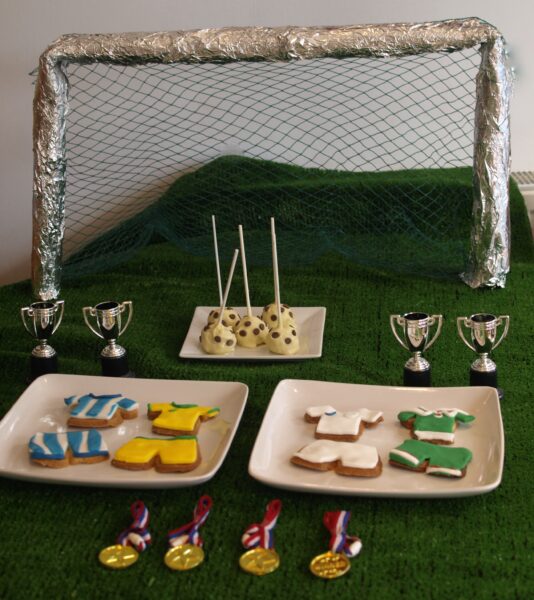 Are you planning on watching the Big Game tonight, or maybe the first England match? If so what about making it a really big event and celebrating the FIFA World Cup with a party for your family and friends? We got excitement building in our family by holding a World Cup football party and here I show you everything we did to give you ideas so you can host your Big Match Party There are lots of other parties happening this week so look out for the hashtag #BigMatchPlanner and #CollectiveBias.

We saw the official mascot of Brazil 2014, Fuleco the Armadillo

After we had picked up the drinks things got serious and we started on the decorations. I love making stained glass windows using tissue paper with the girls, it is a really easy craft but looks so effective and all you need is tissue paper, contact paper and card. I thought it would be a great idea to make some World Flag stained glass windows. We chose England and  Brazil of course. The other flags are our teams in the family World Cup Sweepstakes. I’ve got Mexico, which is why our party has a Mexican twist to it.

To decorate the party tables I bought some fake grass from Amazon. I think this is normally used for decorating green grocer stalls. The girls liked playing with it and I think I will use it afterwards for them to put their farm toys on. We also made a mini goal using the cardboard rolls from wrapping paper, covered in tin foil, with some netting attached. This made a really fun background for all the food. Oh and yes the girls still wore their princess dresses throughout – who says you can’t be a princess footballer?

I also bought some medals and mini trophies for the party games. These looked great displayed on the table. They were from the party section at Tescos and we had made up some Football party bags with football pen sets.

The first thing I made were some football cake pops. These can be made the day before and left in the fridge. Cake pops are a bit tricky so I kept it simple by using white chocolate to dip the balls in and then using some milk chocolate drops for the detail on the balls. Also I didn’t stand them up which makes them slightly less likely to fall apart. They didn’t last very long!

I also made some World Cup team football shirts. These are really great as you can eat the shirt of the team you are supporting. For a big match you could make biscuits in just those team colours and see which are eaten first. Perhaps it might predict the outcome. These were made with a simple biscuit recipe and ready made fondant icing. It would be a fun activity for older children to decorate their own biscuit, even designing their own kit.

For the main course I made hot dogs with flavours to match the different teams. American hot dogs for the children which were plain with some onions and lots of ketchup, Mexican with lots of spicy salsa, and Brazilian with beans, chilli, lemon and peppers.

The girls helped me make some football cupcakes. We kept the decorating really simple with some green fondant and chocolate footballs on top.

The final part of the food was the football piñata cake. The cake was decorated with black and white fondant icing.

The piñata cake is shaped like a football with a special surprise inside as when you cut it lots of chocolate footballs and sprinkles spill out.

Disclosure: I am a member of the Collective Bias® Social Fabric® Community.  This shop has been compensated as part of a social shopper amplification for Collective Bias and its advertiser.

The food didn’t last very long. Molly is supporting Brazil as you can see by her choice of biscuit. We were lucky with the weather which meant the children could all eat outside as a picnic. Other food we served were, tacos, sandwiches cut with the football shirt cutter, pizza and football shaped cheeses.

After food it was time for party games. The big hit of the party was a football shaped piñata filled with treats.

We made the football piñata using papier mache and a giant balloon and then decorated it with black card hexagons and filled with football themed treats. The twins got a bit carried away. I was so pleased as it survived rigorous bashing by 2 adults and 7 children. It’s actually very good stress relief. There was a fun scramble for the treats when the piñata had spilled apart. The football stickers were particularly popular with the boys for their collections.

We played pass the parcel on the trampoline. Can you tell what is in the parcel?

Then we had a keepy-uppy competition. The winner won a little trophy. We also played musical statues with the children having to do their best goal celebration dances. If we had a bit more space in our garden we could have set up a goal and had a mini penalty shoot out.

After it was all done and the children were finally in bed, I celebrated a successful party with a glass of Coke Zero and a slice of football cake. Now let’s just hope Mexico win the FIFA World Cup so I can host a celebration party with my sweepstake winnings.