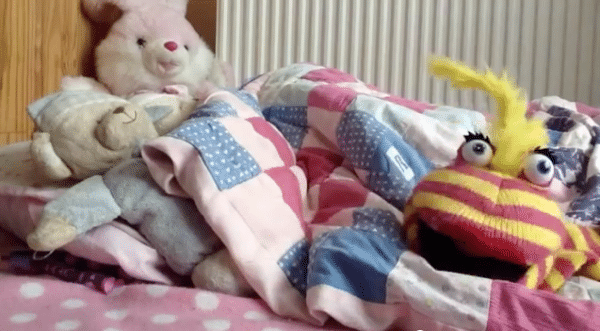 Sometimes we all need a hero. Nights are growing cold and dark. You just need someone to cuddle up to. Someone who will stay awake and watch over you when you will sleep. Who will fight the monsters who only come out at night.

That’s what teddies are for. WIth their bland, smiling faces, fluffy tummies and pastel colouring, you would be forgiven for ignoring the truth. They are actually monster fighters in disguise, sent to protect are youngest and most vulnerable children. It’s a thankless job, but someone has to keep our children safe from the monsters who lurk in the dark corners of their bedrooms.

Molly’s favourite teddy is a pale blue bedtime teddy she calls Bluebee. She started off with a pink one, we ended up with two when we found one on holiday and thought it was ours. We left her favourite pink one at nursery overnight and she was distraught (the second one was not the same – despite the fact it looked identical – she could even tell the difference in her sleep). Luckily, she was happy to buy a new blue one. When the twins were born she gave them a pink teddy each. Rose only likes muslin cloths but the pink teddies soon became Charlotte’s favourites. I bought a couple more when she took to them, as I was worried we would lose them. They have changed the design now so they have stars on them. We also recently added to the family with a starry blue teddy. So that brings the total up to 6 bedtime teddies.

No matter how many we have there is only one Bluebee. I have no idea what we’d do if we lost him. Molly isn’t brilliant at going to sleep, she hates to be on her own and if it wasn’t for her beloved Bluebee I don’t think she would spend one minute in her own room.

He really is a remarkable teddy. Just watch this video, which I managed to capture when he thought no one was looking. You can see him fighting off a fearsome beast with his favourite weapon – a toothbrush!