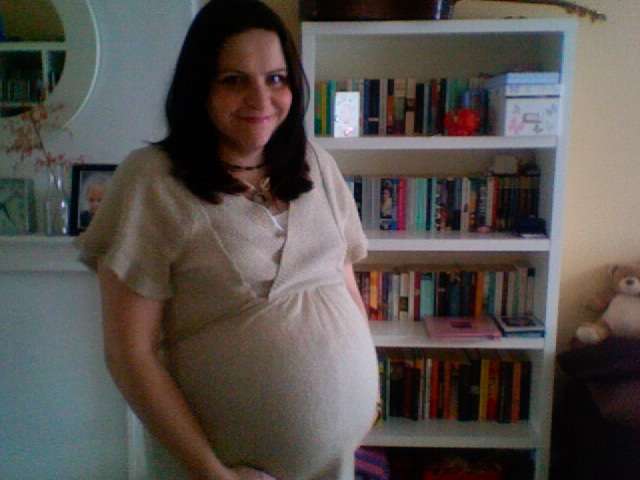 “So are there twins in the family?” the sonogropher asked. She didn’t need to tell me I was expecting twins because I had already worked it out. There were two large round circles on the screen, two sacks, I knew without being told.

I had already had some suspicions. I was in hospital on a drip after becoming incredibly dehydrated through extreme morning sickness. This is called hyperemesis gravidarum which is characterised by constant sickness and nausea. I was sick about 3-4 times a day with my first pregnancy – with the twins it was more like 9-10. After realising I had lost a stone in a week I started to google the symptoms and one of the things it says was that it could be due to carrying twins – although this isn’t always the case. So I had the idea in the back of my head already, but I didn’t seriously consider I would be having twins. I toyed with the idea for ten minutes before I went to see the doctor and as we went down in the lift to get an early scan with the midwife, we had a little joke about it, haha it could be twins. Ten minutes later I was no longer joking.

But nothing can ever prepare you for the thought of seeing two babies on the screen. There were so many emotions but the overiding one was hysteria. It couldn’t really be happening. The strange thing was making all the phone calls. I was in hospital, on a drip, feeling so awful, unbelievably awful, and people were congratulating me. I couldn’t take in the news at all, I just wanted to sleep.

The worst thing is you are on a maternity ward – with people giving birth or often having lost babies right next to you. The reality of childbirth is staring you in the face and it’s terrifying. One woman went into labour in the bed opposite while my brother-in-law was visiting. Within fifteen minutes the baby had been delivered there and then, while we tried to make conversation. It was harder when people were in the ward because they were suffering a miscarriage, they would be so sympathetic to me – yet they were going through such an awful time – how could I tell them I was there because I was expecting not just one but two babies?

The main problem with hyperemisis is that you lose so much fluid you become dehydrated. The treatment is anti-sickness drugs and being put on a drip until you are rehydrated. This only takes about 24 hours all being well so it wasn’t long until I was discharged – still slightly woozy to try to process the information that we would be bringing home two babies in  a few months. I was prescribed anti-sickness drugs but it wasn’t long before they stopped working. By the next weekend I was back in hospital hooked to a drip. It’s amazing how quickly you can become dehydrated if you are not drinking everything.

In the middle of this my daughter, who was two at the time, got a really nasty sickness bug. For a whole night she was sick every five minutes. The next morning she was lying motionless and floppy on the sofa, barely responding. I was advised to call the ambulance and the paramedic said she was dehydrated but it was probably worth taking her to the hospital. I thought maybe I was overreacting when she insisted on putting on her boots before we left. I spent the afternoon in an assessment unit at the hospital force feeding her juice and trying to get her to pee into a . Not the best week of my life.

What stays with me from this time was the feeling of slipping away. I had never been apart from my daughter for more than a few hours, let alone a night. We were inseparable. But I was so desperate to go to hospital just so I can rest. I just wanted to sleep. I’ve never been so tired. After the second time I was given three sets of anti sickness drugs and this time they worked. I still felt awful but it was alright. Just about.

I still couldn’t really eat. I could stomach plain things, crackers, crisps, potato. My main thought during this time was to wonder if I’d be able to eat Christmas dinner. Christmas came and I was determined to enjoy it. I didn’t feel to bad so enjoyed myself relishing the food and carrying on as normal going for a long walk. I must have overdid it though because I felt so bad on Boxing Day I spent most of it in bed. The strange thing was my lips had swollen to huge proportions. I had a trout pout – which looked like I had got botox overnight. If it hadn’t been Christmas no one would have believed I hadn’t had a procedure. As soon as I was home I went to the doctor as it can be a sign of preeclampsia, luckily my blood pressure was still low – the doctor put it down to a twin pregnancy symptom. I realised I was going to get all the symptoms in the pregnancy books.

So for anyone else who thinks they might have these symptoms, go to your GP if you experience any of the following:

I began to write this post after writing about the care I received in the 100 word meme for   Save The Children. I was lucky to receive the care I did. My biggest worry during this time was that the twins would be born early or really tiny. This can be a complication with having hyperemesis. Luckily although I survived for three months on nothing but boiled sweets and wethers originals the twins must have been getting some nutrients because they were a good size, 6″7 and 6″13, and because I managed to carry them until 38 weeks they didn’t need to spent any time in special care.  I’m so grateful for that.  And the birth? Well that’s a story for another day.