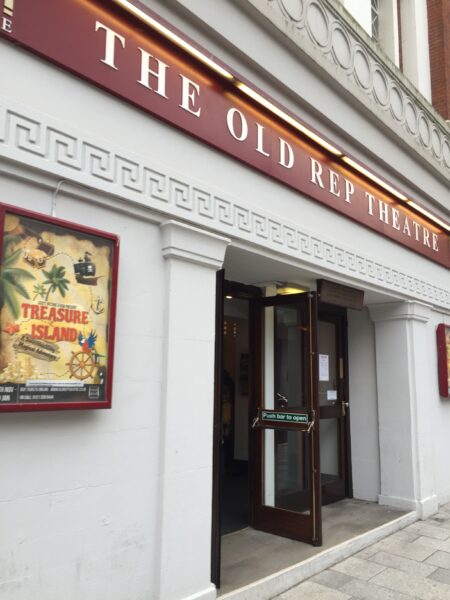 At the weekend, we went to see Treasure Island at The Old Rep Theatre in Birmingham. This show is perfect family entertainment full of laughter, excitement, action and adventure. It is the perfect Christmas treat for the whole family.

The whole experience has been really carefully thought prepared for young audiences. You can buy cute pirate hats  in the shop and pose in a pirate ship, there is a gallery of children’s art work on the staircase and a pre-show of friendly pirates around the theatre as you take your seats. All these little touches get you excited for the show and there was a definite buzz of anticipation from the audience. The set it really stunning and is cleverly transformed from a tavern to a pirate ship to treasure island.

The show itself is a clever retelling of the Robert Louis Stevenson classic. I like the fact it was based on this adventure tale which made it a lot more appealing than the usual fairy stories. There was also more of a story to follow which made it much more enjoyable for adults. There were a few changes to the traditional story, a feisty girl character Jesse, who the girls loved, who is given as much action and dialogue as Jim Hawkins. There is a rapping parrot and a beautiful mermaid – what more could you want? There are even giant comedic parrots.

The show is brought alive by an enthusiastic cast who clearly are having a fantastic time on stage. This feeling of enjoyment and camraderie make the audience feel a part of a grand adventure too. There are plenty of jokes, some for the older members of the audiences but lots of slapstick for the children. There was even a joke for the mummy bloggers in the audience, put in just for us! There is live music throughout and I loved how members of the cast took it in turns to play the instruments which create the mood of the show. There is a lot of audience participation and a few pantomime “He’s behind you” moments which keep little audiences involved but not too many to distract from the story telling.

After the show we were given a real treat and got to meet some of the cast. The girls were a bit star struck to meet a real mermaid and their favourite character Jesse. It was really lovely of them to take the time to talk to us, aftyer what must have been a tiring performance!

We got to go on stage and see how the special effects are created. It was lovely chatting to the cast who were incredibly passionate about the show and clearly loving every minute of it.

A family ticket for Treasure Island costs just £55. This is great for 2 hours of entertainment. It is suitable for over 4 and although there is a little bit of strobe lighting my scardy-cat 5 year olds had a wonderful time and were loved every minute. The show is on until the 3rd of January.

Disclaimer: We were given a family ticket to the show for the purposes of this review.