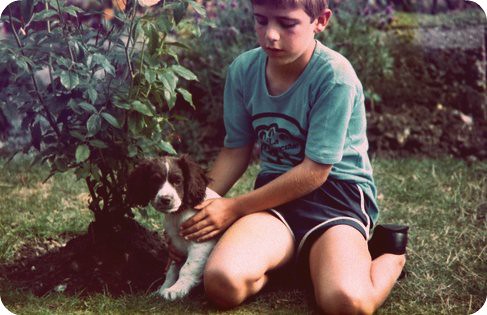 There is nothing in life more exciting for a young child than getting a puppy. Even the word puppy is exciting. I was in infant school when we got our first dog. I don’t think I talked about anything else for weeks. What made it even more exciting was that the house where the puppy lived was right next to my school. Every breaktime I would rush to the fence and try to catch a glimpse of the puppies shiny wet nose and wagging tail.
When it was time to write about our news in class it was the first thing I shared. I remember exactly the moment when I realised the power of words and writing. The teacher loved my writing so much she sent me up to the deputy head’s room to get a gold star. When the deputy head read my report and found out the puppy was so close she wanted to go and see the puppies for herself.
We ran across the quiet playground, the deputy’s heals clacking on the concrete. There they were, a mass of brown and white spots and wiggling bottoms. We stood and looked at them for a few minutes. Being out of class when everyone else was in their lessons was the most exciting thing ever to happen to me. There in the middle was our puppy, a small shy little thing. I pointed her out to the deputy head and filled with pride when she said what a beauty she was.
A few weeks later and we took her home and called her Chloe. Although I love dogs in theory I don’t think I’ll ever be a dog owner. To me they are like having a baby which never grows up. I feel the same way I do about small babies, they are cute to look at every now and then but that’s it. I don’t want to go back to the constant care babies and dogs need.
At the weekend my nephews went to choose their first dog, Lola. While I don’t want a dog myself I can’t wait to see her. I’m sure they were full of the same sense of anticipation I was as a child.
There’s just one problem, from the pictures I can see Lola is just a bit too cute. Think we’ll be having a few arguments when we get back. I’ve already had a few, “but muuuuummmy? Why don’t we have a dog?”
Anyone got any good arguments to appease a four year old hell bent on dog ownership?