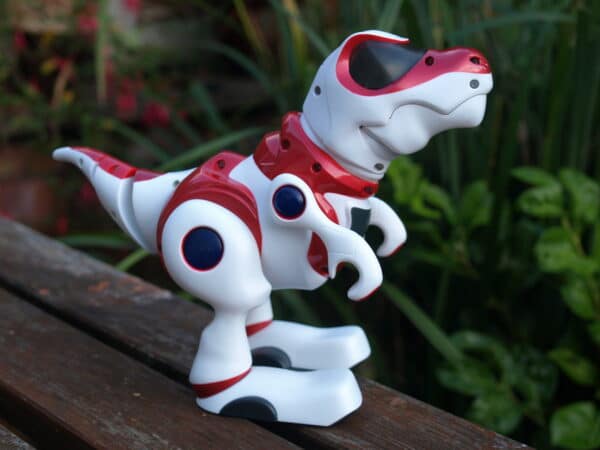 I am pretty certain the Teksta robotic toy range will be toping the Toy charts this Christmas. It is the first toy robot which is genuinely impressive. usually there are big claims for robots which don’t live up to the hype but the Teksta toys have a big range of movements, combined with noise and lights which add up to a fun toy which will keep the family entertained long after the Christmas pudding has been eaten.

We were sent the T-Rex to review. It looks very sleek and stylish, made from white a red plastic with black details. His face is really detailed and expressive. He will actually show a range of emotions and will look unhappy and groan if you don’t feed or play with him for a long time.

You can control the T-Rex with your hand and your voice, getting him to move and stop when you want him to. He also has a bone which he will sniff, then chew on and spit out. This is the girls’ favourite motion as he will chew anything and when he spits it out it makes you jump because it is so sudden. He even gives a huge burp when he is finished. Which of course is the funniest thing the girls have ever heard.

The Teksta T-Rex is really clever and will repeat what you are saying. There is even a fun singing and dancing mode.

There are over 100 different actions which the T-Rex will perform. He is happy and wags his tail when you have learnt new commands and this makes the experience really interactive. There are motion sensors in the head of the T-Rex so that he responds to your gestures.

The toy takes 4 AA batteries. After a week of the girls playing with him nearly constantly it hasn’t needed new batteries yet.  This is a great toy for a group of children as they can all take turns and play with him together. it is a good idea of they want a pet but you don’t want the fuss as they get the fun without the hard work. There is also an app program which we haven’t had chance to explore yet but which looks really promising.

I was thinking this would be a fad toy which they would love for a couple of days but the fact there are so many different programs means it will keep their attention for much longer. The Teksta T-Rex costs £59.99. This would be brilliant for a dinosaur fan or for children who love playing with robotic toys. It is bound to make them laugh and give them hours of fun.

Disclaimer: We were sent this toy for the purposes of this review.