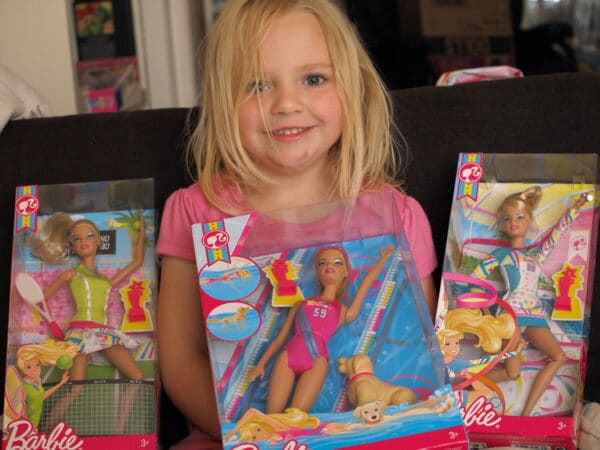 We made a pact about Molly about her birthday: she could either have a magician party or presents. She was adamant she wanted a party and wasn’t worried about us buying her presents a she would get loads off her friends anyway. This was the plan until the blogging fairy sent us some Barbie dolls to review. You can see her surprise to have some presents to open after all!

Barbie is a lot better role model for young girls than when I was growing up. Then it was all about the way she looked. These Barbies are athletes. There is a tennis player, rhythmic gymnast under and the best a swimming doll which actually swims. Each doll has a uniform, a trophy and extra accessories to play the sport.

The dolls at priced a round thirteen pounds which I think is right for these. As you would expect from Mattel they at very well made and there is a fine attention to detail.

The I can be swimmer doll is a little more expensive because it has a wind up mechanism which means the arms rotate so she can swim in the bath. She also comes with a dog, with a wind up tail who can swim as well. This was definitely the highlight as he is so cute when he swims.

You can watch a video of the Barbie swimming below.

Disclaimer: I was sent a set of team Barbies to review. The views are my own.