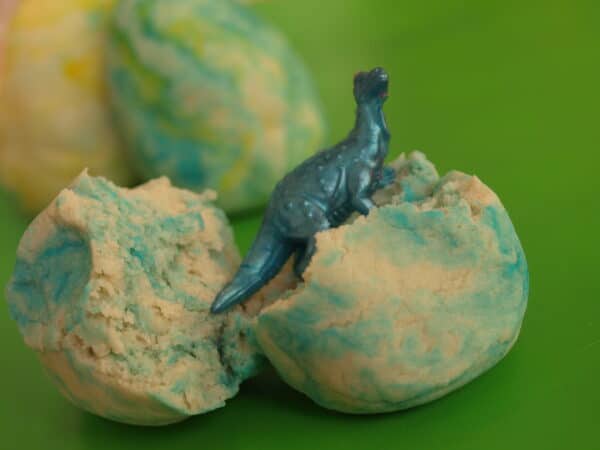 The twins are dinosaur mad at the moment. They are loving having a dinosaur theme in school and any dinosaur activity goes down well. As we needed to make some new play dough this week I thought some play dough dinosaur eggs would be a good idea.

I made a batch of play dough and waited until the end to mix in the food colouring. I used blue and green food colouring and only partially mixed it to make speckled eggs. I used an apple scent in the play dough as i thought that would be fresh and natural. I rolled them into egg shapes and left them out for the twins with some dinosaur cutters and dinosaur toys.

Inside I hid some baby dinosaurs. They were so surprised to find them.

This was a great way to start off imaginative play as they began to play a mums and dads activity with the dinosaur toys.

They also loved to make their own dinosaur eggs and give them to each other. They thought it really funny to hide different things in the eggs and not just baby dinosaurs.

It was a good activity to practice rolling and shaping the play dough. The girls thought the play dough needed more sparkle and added lots of glitter. I guess we’ll never know if dinosaur eggs are sparkly or not.

The play dough was also great for rolling and cutting using the dinosaur cookie cutters.