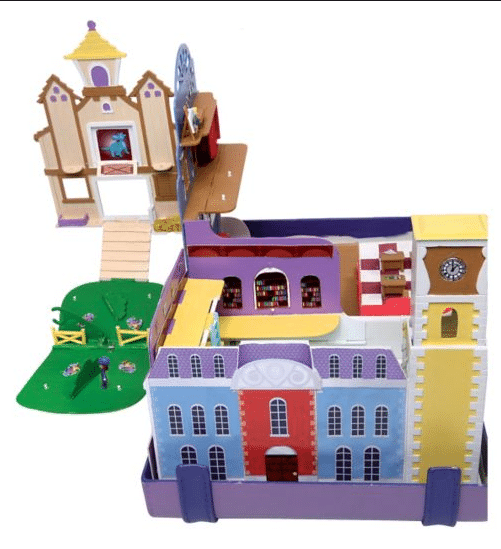 The girls are all big fans of Sophia. Recently we hosted a twitter party where we got to try lots of the new Sophia range of toys and we really loved them. The girls were therefore keen to test the Sofia Royal Prep Academy Backpack

I think this is a really great idea for a toy. Whenever we go out the twins want to take all their favourite toys with them. A play set in a bag is a great idea and this is really cute and compact but has lots to play with. It would be perfect for a holiday or for spending the day with relatives who don’t have many toys. The bag itself is really strong. It is made of shiny purple plastic and looks like Sophia’s school satchel.

With the set come four mini figures. There is a Sophia figure, Fauna one of the fairies, Minimus, Sophia’s horse and Prince Zanda. It is nice to have such a range of characters to play with, especially to have a boy. The figures are really detailed and look like their characters. Minimus, in particular, has a cute face and is really delightful. 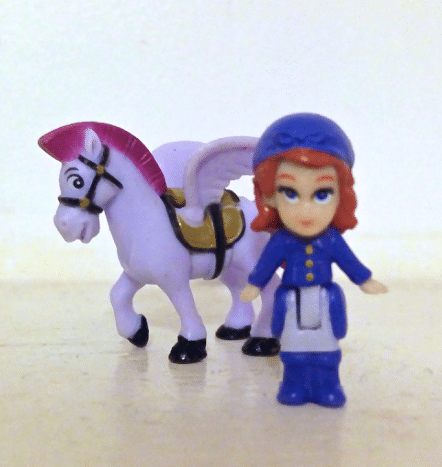 The best thing about the toy is that when you open the backpack the playset flips open. It is hard to tell from the pictures but this is really clever Inside is the whole of Sophia’s school, Royal Prep Academy. The set becomes really quite large. It’s a bit like a tardis!

Inside there are lots of hidden surprises. There are lots of different areas to play in, including library, classroom, dance floor, art room, stable and courtyard. They each have little doors to open and shut. The figures are really tiny and can fall over put their are little tabs to place them in.

There is a space for Minimus to fly over a jump, as well as spinning platforms, moving staircases and books where you can actually turn the pages.

The set costs £34.99 from Flair. Although this isn’t a budget toy there is a lot to do and would be great if your child is a Sophia fan and if the love small toys with lots of secret things to do. It would also go well with any of the other Sophia play sets as you could take all the mini figures to school.

Look here for my other Sophia reviews:

Disclaimer: I was sent the toy for the purposes of this review. The views expressed are my own and are unbiased.