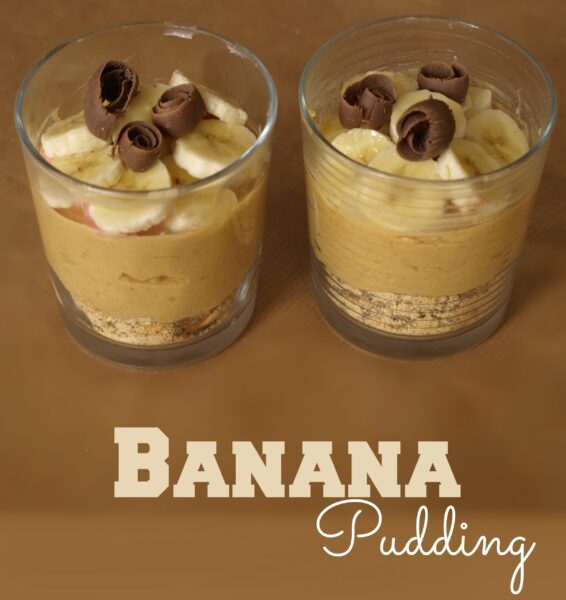 From banana milkshakes to banana bread, this unique flavour is definitely my sweet of choice. So when a friend of mine told me of a banana pudding recipe, I didn’t waste any time trying it out.

Friday evenings usually consist of a film and a takeaway in our house; it’s just what the doctor ordered after a long week in the office. We live in the Brighton area and food delivery in Brighton is thankfully readily available. For desert we’ll usually delve into a box of chocolates or open a tub of ice cream. This weekend however I decided to surprise the family with these nifty deserts.

Many will use shop bought wafers, cool whip and instant pudding mix to create this desert. I, on the other hand, decided to create something a little different from scratch. This recipe uses a base that is a combination of chilled custard, bread pudding and vanilla pudding. This layer is then topped with sweetened condensed milk, whipped cream and cream cheese. Most will just top it off with a few sliced ripe bananas; I however prefer to sprinkle it with dark chocolate shavings as well.

Before trying this recipe at home, it’s important to ensure you have all the required kitchen tools at hand.

Before you begin, make sure the oven is set at 350°F. In a mixing bowl, combine the butter, sugar, eggs, nutmeg, salt and cinnamon. Stir in the hot milk and vanilla and then pour the mixture into the ramekins. They should be around 1/3 full.

Bake for around 30 minutes or at least until the banana puddings begin to set and then cool at room temperature.

For the topping, slice banana thinly and put to one side. Whip the whipping cream and combine the sugar. Mix the condensed milk and cream cheese then apply to the pudding tops. Top with banana slices or chocolate shavings (or both), chill for an hour and serve.