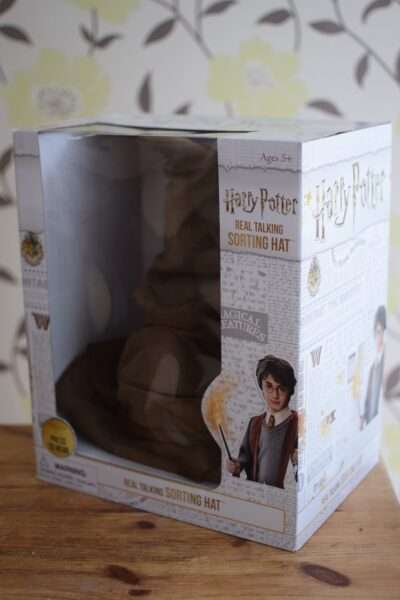 Which Hogwarts house would you be in? Most people would love to be in Gryffindor but I’ve always had a soft spot for Hufflepuff. Their mascot is a badger – a badger! There are so many amazing ideas in the Harry Potter series of books that it is hard to pick out one stand out moment. The children getting sorted into their Hogwarts houses by the sorting hat is such an iconic part of the series that it is one the children return to again and again when they are recreating the stories. Now they can finally do it with a real talking Harry Potter Sorting Hat.

The Sorting Hat comes on the release of the Fantastic Beasts: The Crimes of Grindelwald. there are so many different items on sale right now but I think the Talking Sorting Hat from Kids@Play will be the big hit of Christmas. It comes in a big box which will look great underneath the tree and when you open the box it doesn’t disappoint.

The hat is not plastic but soft fabric with such amazing attention to detail. It looks just like the hat in the books and movies. When you put it on the hat starts to move and talk. The voice is just the same as in the films. It sorts you into one of the Hogwarts houses. This will make a fun activity at Christmas, I can’t wait to find out which house the Grandparents are in. It would also be brilliant to use at a Harry Potter themed party or if you are studying the books in class.

I think this a toy which you will use a few times a year rather than every day, however, it will look amazing in your room while you are storing it. It will add such authenticity to your Harry Potter games.

You can read these reviews from other bloggers who have tried out the hat: