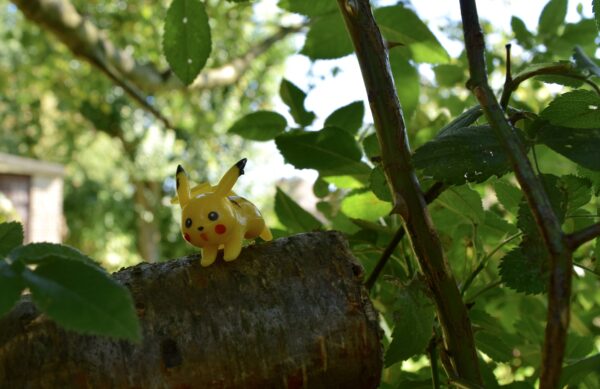 I was looking after a group of children over the holidays and I knew they would want to play Pokemon Go but I wouldn’t be able to fit them all in the car to take them somewhere where there would be Pokemon. Instead, I thought we could have a real life hunt for Pokemon in the back garden. First, they made some real life Pokeballs, and then I told them I had hidden Pokemon figures arouad the garden. They were really excited.

They were dressed for Pokemon hunting wearing the Pokemon trainer caps they had designed.

We let the twins have 6 seconds head start as they were a bit younger than the others. They were actually the best at finding the Pokemon.

You can buy a bag of Pokemon figures for under a tenner. They are really cute and the perfect size for hiding around the garden. I hid them in trees and in the sandpit.

The children had so much fun hunting down the Pokemon when they finished they each chose a favourite and then got me to hide the rest again.

After they had finished playing the children enjoyed on of the Pokemon cookies they had made earlier.