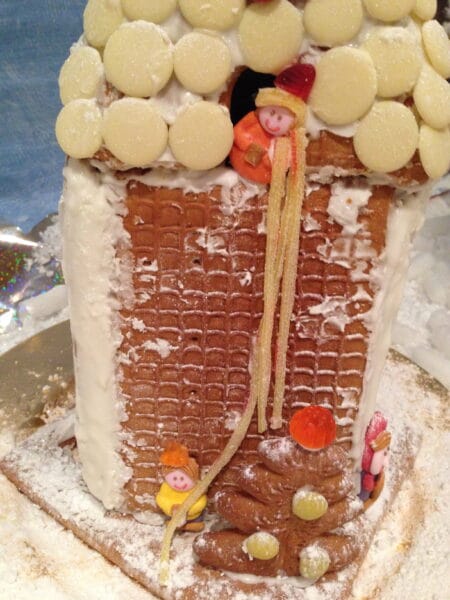 The obvious choice was Rapunzel’s tower. It is Charlotte’s favourite fairy tale and we all loved seeing it brought to life at Disney on Ice a few weeks ago. The only problem was making it long and thin enough but not make it fall over.

I made a card version but it ended up looking nothing like this as I couldn’t get the middle section to work properly. Working with card and sticky tape is so much easier than gingerbread and icing!

I needed to make some extra gingerbread panels so used the arts from the kit as a template. I found a pizza cutter worked brilliantly for cutting the gingerbread into clean lines.

I had a little helper making the gingerbread. Rose loves mixing and did a good job. Not so helpful during the putting together stages so I had to wait until they had gone to nursery as they kept knocking over  the panels. One actually broke because they knocked it on the floor. Disaster! That was why I went for a three sided tower in the end.

Next it was assembly time. I had NO IDEA this would be as hard as it was and the design needed several modifications before it would stand. perhaps if I’d had another person to hold one side it would have worked. The final shape is a triangular prism with the roof on the top stuck together with a lot of icing.

I decorated the roof with some white chocolate buttons and some smarties around the window and lots of icing for snow.

I cut the yellow parts off some rainbow candy for Rapunzel’s long hair. The witch is hiding around the corner behind the gingerbread tree.

I would have like d this to be a bit bigger but other than that it looked enough like Rapunzel’s tower for the girls to be excited when they saw it. Molly thought I should make the gingerbread dog into the chameleon Pascal which was a lovely idea but I ran out of time. Anyway next time I will stick with the card and sticky tape – although I have to admit, it doesn’t taste as nice.