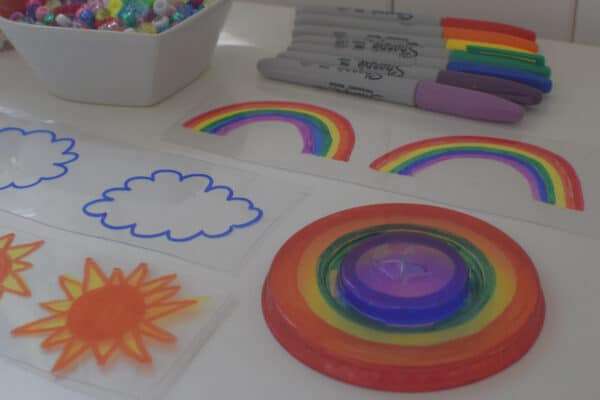 We’ve been looking for ways to reuse single-use plastic. We collected a lot of sheets of clear plastic from packaging and some lids from drinks at fast-food restaurants and decided to recycle them using sharpies and beads into a rainbow suncatcher mobile.

You also need sharp scissors and a hole punch.

First, we drew pictures onto the clear plastic using the sharpies. We drew two rainbows, two clouds and two suns.

Next, we decorated the lid in rainbow colours.

After that, we punched holes around the edge of the lid of the drink. You need to space them evenly. I have a single hole punch which is slightly easier than a double document hole punch but this will work just as well. We also punched holes in the top of the rainbow, suns and clouds.

We tied the string to the holes in the lid and then threaded pony beads onto it. We used 15 blue beads for the clouds, 10 red, orange and yellow beads for the sun and 20 rainbow colours for the rainbow. The different amount of beads meant the strings came out at different lengths.

At the bottom of the string, we added the pictures. We tied a double knot in the bottom and cut off the ends of the string. Finally, we looped a piece of string through the top. We used a large button to keep the string from falling out. Then we pinned the mobile in a sunny window.

The mobile looks really pretty blowing in the breeze. You could add some little bells to make a noise as it spins or use your own design on the bottom.