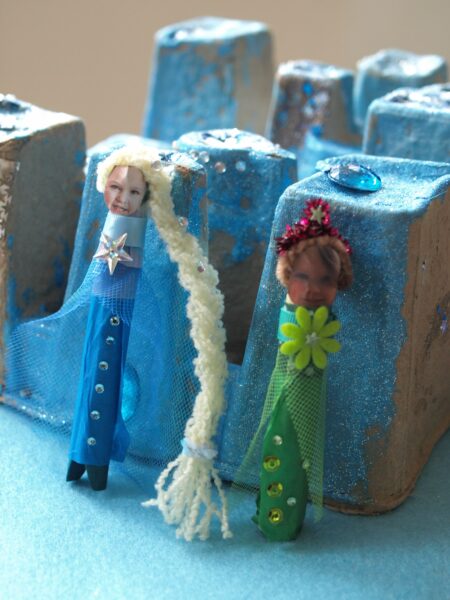 The girls knew what they wanted to make as soon as they saw the packs of craft goodies from Bostik and CraftMerrily. They wanted to make Princess peg dolls. This has been on our to do list for ages. I loved the Frozen peg dolls on Imagination Tree and the Tinkerbell clothes pin dolls from Red Ted Art.

I wanted to give the girls as much free reign as possible to make their own dolls so I gave them access to all the materials and a peg and let them make them as they wanted. I also added some wool , gem stickers and washi tape as well as some net material. The girls wanted their dolls to look like them so I printed off some mini photos and cut them out for the faces.

I was really impressed with the blu stick from Bostik. It stuck the faces onto the pegs really well and didn’t make them all gunky.

How To Make Princess Peg Dolls

I loved how this craft allowed the girls to create something from their imagination .It would be a great craft for a mixture of ages or for boys and girls.

The end result was really good. The twins are nearly four and they were able to make their own princess dolls. The only part I helped with was the hair which is a bit fiddly. The hair is made with a few strands of wool stuck with sticky tape and then attached to the top of the peg with a bostik foam pad.

While they were making theres I made them a couple of Elsa and Anna peg dolls. You could use a picture from the film to make them more like the characters.

Once they were finished we put them in the ice castle which the twins have been making. I will show you how we made it later in the week.

I didn’t stick too much to the film for the design but they look enough like the characters for the girls to be happy.

Once they were finished we left them to dry.

Then it was time to play. I love crafts which inspire imaginative play and these are brilliant because they are straight from the girls’ imagination.

Although of course Anna had to sing “Do you want to build a snowman?”

Check Out Our Other Crafts