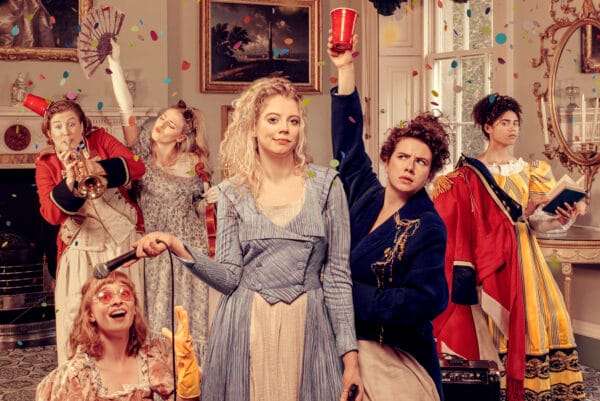 I don’t think I have ever laughed so much at a theatre show as I did last night at Pride and Prejudice (*sort of) at The Rep Birmingham. I am a huge Jane Austen fan and have always though Pride and Prejudice to be the perfect novel, so I was incredibly excited to be invited to the press night. The title of the show is very intriguing. I knew this would not be a straight retelling of the story and couldn’t wait to see how it was transformed onto the stage. When we arrived at the theatre the set looked just like a Regency house, complete with a stunning staircase and chintz curtains.  Little did we know just how refreshingly different from the original, the show would be, while staying true to the plot and characters.

The energy was electric from the start of the show to the end. There was such an incredible atmosphere in the theatre and there was not a single lull throughout the performance. To say the show is funny is really an understatement. I started laughing from the very first moment and didn’t stop until the end, proper full belly laugh. The story is told by the maids who are always in the background of the story. They share in the character’s most intimate secrets, interfere with the plot and act as a greek chorus to what is going on, breaking through the fourth wall to comment directly to the audience.

The humour of the show works on lots of different levels and the jokes are relentless, it really feels like I need to watch it again just to make sure I didn’t miss anything. A lot of the humour comes in the anachronisms. The maids come onto stage, going about their everyday business of folding the laundry and dusting, while wearing modern rubber gloves and suddenly breaking into a modern karaoke dance number. I love how the microphones appear at different key points in the story and you know it is time for song. Two of my all time favourite characters in literature are Mr and Mrs Bennett, and that is the case in this version as well, after all, we have all met people just like them. Mrs Bennett, played by the incredibly talented Isobel Mcarthur who also wrote the play, is hysterical in both senses of the word. However, the script puts her in a slightly more sympathetic light by pointing out just how difficult her position was, matchmaking is not an idle hobby if none of the girls marry they will all be destitute.

There is a lot of physical comedy, Lizzy rolling off a sofa in despair, the Bennet families’ bad behaviour, Mr Collins struggling to get on one knee to propose, and one very memorable cringe worthy catastrophe with Caroline Bingley’s expensive vase. Of course running through all of it is the acerbic wit of Austen herself. The spirit of the original story remains, while the words themselves are modernised. There is definitely a lot more swearing than I remember in the original! Somehow the cursing gets to the heart of the character’s feelings. Even if Elizabeth does not use the actual swear words in the book the feeling is there behind her sarcastic retorts.

There are a few in jokes for hardcore Austen fans, such as the maids commenting on how dry Darcy is when he appears suddenly at Pemberly. However, you don’t have to be a fan to enjoy the show. I loved the portrayal of the Bennet sisters. The hilarious Tori Burgess plays both shameless flirt Lydia and poor Mary, ridiculous in pink frilly silk, overlooked by everyone and constantly told to get out of the way for her more attractive sisters. I love how it is Mary who gets the last word. It is worth noting that each cast member plays several parts, but there is so much characterisation that you actually forget. Christina Gordan, who plays sweet and lovely Jane, also plays haughty Lady Catherine. Her sudden appearance, like something from a horror movie is just brilliant. One my favourite jokes was when Lady Catherine gets Elizabeth to sing a song written by her famous cousin.

Like any good musical, the songs in the show show a glimpse into the characters feelings. Most memorably Lizzy singing You’re so vain, contemptuously glaring directly at Mr Darcy. It is also hard to forget Jane, full of hope, straddling on a large plastic horse, in the rain, and then sobbing and singing her heart out when her hopes are later dashed.

As well as the comedy, there are also moments of real pathos. For example, the maids, have to return to their mundane lives after all the excitement and romance is over, and we remember that they have only ever been onlookers. I really enjoyed the fresh take on motivation behind Charlotte Lucas marrying Mr Collins. Hannah Jarrett-Scott brings out her secret love with a sweet tenderness. Watching her soul being slowly destroyed by her awful marriage was truly heartbreaking. This subtle nuanced performance is even more brilliant when you realise that Jarrett-Scott also plays delightfully silly Mr Bingley, who cannot seem to hold a proper conversation. At its heart this is a love story, and that element is not forgotten. In amongst the costume changes and buffoonery, there is genuine emotion. You totally believe in the characters, and feel so happy when Darcy and Lizzy get their hard-won happily ever after.

It’s hard not to feel this is a true celebration of women. The female characters care and support each other, even when acting badly. They treat the patriarchal social norms of with a roll of the eyes and a karaoke dance number. It is a play written by a woman about women, performed by an all female cast, from a book written by a women. And it’s glorious. Go and see it now!

Disclaimer: I was given tickets for the show for the purposes of this review.