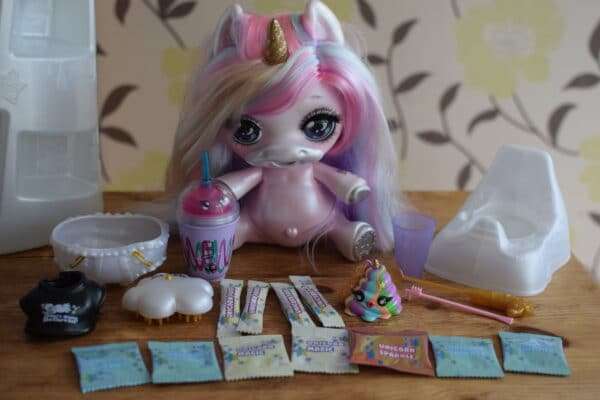 When the girls started asking me for a unicorn which poops slime which they saw on Youtube I thought they had gone crazy. When we were asked to review a Poopsie Unicorn Slime Surprise I realised they hadn’t actually been making it up but there is a real toy which combines the popular crazes of kids and unicorns in one adorable package. This toy is on lots of children’s Christmas lists. It is going to be under a lot of trees this Christmas, whatever I say in this review. It is definitely true that this is a toy aimed at children and not adults. It is not my cup of tea at all – but then I’m not an 8 year old girl. Charlotte loved her unicorn and takes it everywhere with her. Much to my surprise this toy has provided her with hours of fun. Kids are weird!

I was a bit surprised when I saw these toys cost £49.99, this is a lot of money to me, however the box was much bigger than we expected and would be suitable for a main Christmas present.

Inside the large plastic there are lots of shiny packages containing the different parts of the toy. This makes the set really fun and exciting to open. We all felt that the large plastic block the toy came in was not very environmentally friendly. It is a shame it comes with so much plastic packaging.

Inside the main container is the Poopsie Unicorn which is a really large plastic toy unicorn. We received the pink rainbow unicorn to review. The set also contains a unicorn potty 4 Unicorn Food slime packets, 4 Unicorn Magic packets and 1 packet of Unicorn Sparkle to make the slime. You also get a keychain, an exclusive bottle, a unicorn shirt and nappy, a spoon, a hairbrush, a cleaning tool and a measuring cup. All of the designs are really cute.

Charlotte was really happy with how pretty the baby unicorn looks. She loves anything with big eyes and these have huge eyes with pretty long lashes.

The Poopsie Unicorn has a sparkly golden horn. She wears a cute black t-shirt which says Don’t Stop Believing and nappy which you can take off and put on.

As soon as Charlotte opened the box she wanted to brush the unicorn’s beautiful rainbow hair with the cute brush shaped like a cloud.

The hair is soft and shiny and you can style it however you want.

I was a little disappointed with the instructions which came with the Poopsie Unicorn. They were really hard to follow and you definitely needed an adult to help. We actually wasted a couple of packets of the unicorn food as we couldn’t get the mixture to work. We found it really hard to use the unicorn as it was intended, by mixing the slime inside the unicorn and getting it to pretend to poop. We gave up in the end and mixed the slime in a seperate container. You can buy the mixture separately with a Poopsie Slime Surprise Unicorn Series 1-1 Poop Pack which costs £9.99.

You have to add the ingredients as if you were feeding the Poopsie Unicorn which Charlotte found lots of fun. You need to follow the instructions really carefully. When you flick the switch you have to turn the unicorn upside down and the slime mixture came out of the unicorn’s mouth. I felt the combination of slime and long hair was a bit of a worry as the slime mixture got a bit sticky. The girls needed a lot of help to ensure it didn’t get in the hair.

The finished slime takes about fifteen minutes to come together. It is really stretchy and you can add lots of sparkle and glitter. We liked the fact that you couldn’t tell what colour slime you would get until you mixed it up.

When you have finished making the slime you can keep it in the collectable keychain. This means you can take it with you wherever you go and need a quick slime fix. If you ask Charlotte this is definitely her toy of the year. She loves it and would recommend it to any child who loves unicorns and slime.

Disclaimer: We were sent the toy for the purposes of this review.