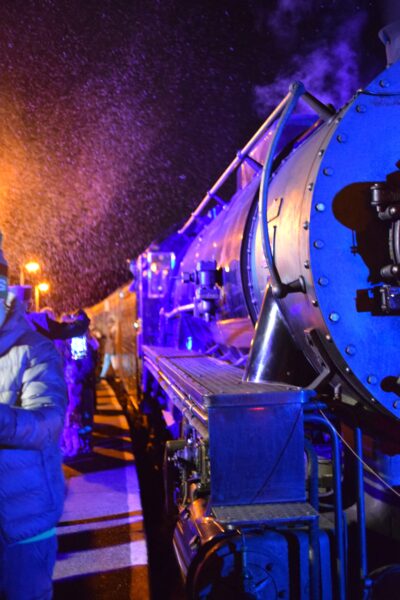 You have to be quick to get tickets for the Polar Express Train Ride at Telford Railway as they sell out so quickly. I’m not one of those people who plans their Christmas trips in May but this trip is definitely worth it. We have always loved The Polar Express book and film. They are an essential part of our Christmas so I knew the girls would love this day out. The magic starts when you get your golden tickets, which look just like they do in the movie. The girls were so excited and kept asking to look at them.

We arrived really early but there is lots of entertainment put on so you are not bored while you are waiting. There is a shuttle bus with buses every ten minutes to take you to the railway. This means there is plenty of parking and no queues which was a big advantage. On-site there is a cafe and a marquee with a magician to keep you entertained and warm while you wait. I was a bit paranoid that we would miss the train but I needn’t have worried as the show stops just before and everyone queues to get on.

On the platform, the music from the film plays and snow falls. It was really magical. A short clip of the opening is played onto a screen but this was a little small so we couldn’t see it and went on a bit too long. I don’t think it really needed this anyway. There is a short tableau of the Controller asking if a little boy wants to get on which was much better and made it feel we were part of the journey, not just watching a film.

The train looked just as I imagined and was decorated beautifully for Christmas. The characters on board were brilliant. They looked like they had come straight from the pages of the book. They sang and danced and kept us thoroughly entertained.

One of our favourite parts of the film is where the children are brought refreshments – and sing the hot chocolate song. This was brilliantly recreated with the same energy and excitement as the film. We all enjoyed hot chocolate and a cookie, which were both delicious.

The conductor let everyone try on his hat and hold his lantern. This was a great photo opportunity!

He even let some of the grown ups have a go!

The ghost from the movie appeared at various points and performed some magic. He also knocked off the conductor’s hat.

The girls enjoyed wiping the windows whenever they got a bit steamed up. I don’t know if that was supposed to be part of the trip but it kept them happy!

The conductor was brilliant. He came round and punched everybody’s ticket and put their initials in it.

This was a simple touch but really clever and really made it feel like we were in the movie.

The girls were delighted with their punched tickets and it was a lovely souvenir to remember the trip.

All the time this was happening the train was moving. It went through a tunnel with lights, like the Northern Lights. Then we looked out one side and saw Santa. This was great fun, especially for little ones who wouldn’t realise how far we had travelled. The girls would have liked to see some more elves.  The story also played in the background and the chef brought round the book to look at. I didn’t really feel we needed this part, there was enough happening anyway and the children found it hard to concentrate on the story playing.

The highlight for the children was when the conductor announced that a special visitor would be coming on the train and did they want to see Santa? This was the reaction.

Santa arrived and gave each of the children his attention. He was gentle and softly spoken and interested in what they had to say and what they liked best about Christmas.

The children knew he was the real Father Christmas because he had a real beard!

Each child received a bell as a special gift from Santa. they all quickly rang it to check if they truly still believed.

The bells were very solid and make a lovely noise when you ring them. They have The Polar Express inscribed on them so you will alwasy remember the trip. The girls are going to put their bell on the Christmas tree.

The trip finished with some songs, we had a helpful song book.

Outside it was snowing and there was the opportunity to take your photo next to The Polar Express.

You can exit through the gift shop and there are lots of snow balls to have a snow ball fight as well as a machine which tells you if you are on the nice or naughty list. Even the staff in the gift shop were jolly and full of Christmas cheer.

This trip got us totally in the festive mood. It was a lovely recreation of the movie and picture book and the children were left enchanted.