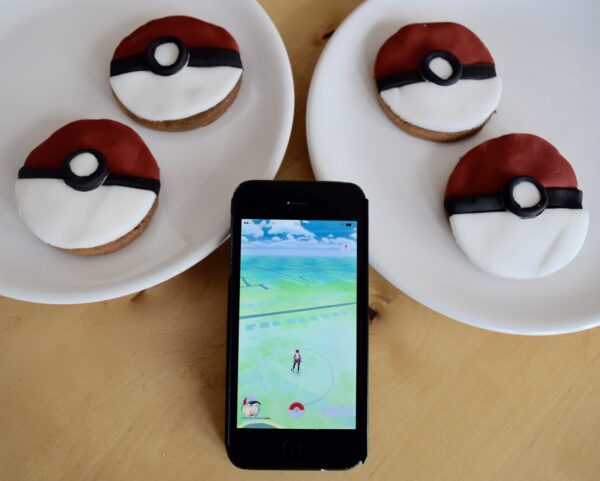 If you are looking to make these even easier then you could just buy any round biscuits and decorate them. We used this easy biscuit recipe to make our biscuits.  Once they were cooled this is how we decorated them.

We also used a round cookie cutter, a sharp knife, and a rolling pin and board. To make the middle circle we used two lids one slightly bigger than the other. They were from the food colouring and vanilla pots.

Although I made the four on the plate below it is totally possible for children to make these themselves and look good. Above is my daughter’s Pokemon cookie. She is aged 9 and did this completely on her own. She didn’t use a cookie cutter to cut the shapes but simply moulded them with her hands. If you have a steady hand you could use royal icing and pipe the black lines on, but I think that would be much fiddlier.

After we made these cookies we went for a real life Pokemon hunt. We decorated Pokeball’s and hunted around the garden for Pokemon toys.

The Pokeball cookies tasted really great and looked so bright and colourful.

To go with the Pokeballs the children also designed their own Pokemon biscuits. They made  their favourite Pokemon creatures using the cookie dough and lots of different animal cookie cutters. They also make Pokemon trainers using gingerbread men. The animals which worked best were ducks, pigs, dogs, mice and zoo animals. It didn’t really matter as they used their imaginations to make them look more like the Pokemon.

Once the cookies had cooled they used different coloured icing, icing pens and chocolate buttons for the eyes.

The good thing about the children making them themselves is that it didn’t matter if they were a bit messy and not Pinterest perfect – they loved them.

We had a whole litter of Pokemon pigs.

Check Out Our Other Pokemon Themed Activities

Design Your Own Pokemon Trainer Caps