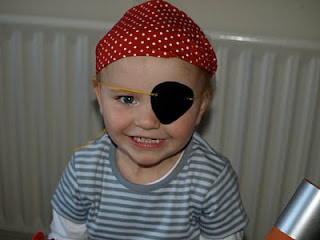 I was so pleased when my daughter said she didn’t want to go to her school dress up day as a princess, but she wanted to be a pirate instead. Pirates are just much more fun. Unfortunately, she decided she wanted to be a pirate at 8.05 on the day of the dress up. Considering we have to leave at 8.30 at the very latest there wasn’t much time to cobble together a costume. Luckily we had made one they year before so we had a lot of the things. So we used a spotty headscarf, a stripy t-shirt and leggings or a skirt. Easy. Finish off with an eye patch and any other pirate accessories you have in the dressing up box.

When she came home from school she found a map giving directions to pirate treasure. She spent the rest of the weekend making treasure maps and hiding coins around the house.  She was so excited today when The Goonies was on and they found the treasure.

Anyway – I have lots of pirate posts to put up over the next few days. Come back for how to make a treasure chest, pirate cakes and biscuits and lots more swashbuckling fun!

Check Out Our Other Customes