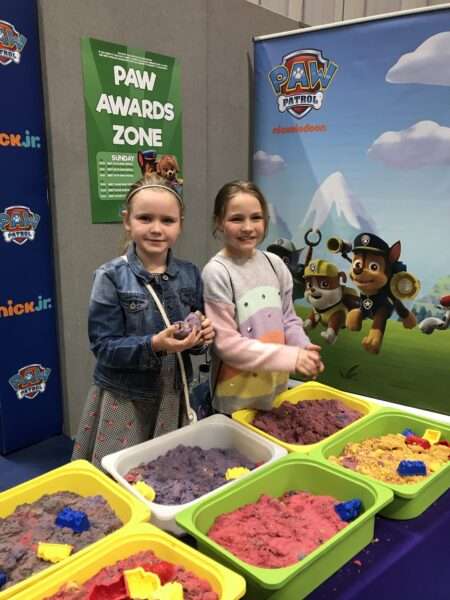 Last weekend we were invited to Kidtropolis at the NEC a to find out more about the Paw Patrol Awards. We had seen the posters for Kidtropolis and were really intrigued to find out what it was like. Greeting us was a huge Minion, which was a great start.

At Kidtropolis there is a whole zone called the Paw awards zone. You could chill out playing with Paw Patrol kinetic sand. The Paw Awards are running for the second year and are a chance to recognise exceptional young people for their contribution to society. There are eight different awards which anyone can enter. If you know or have a little hero in your life who is between the ages of 3-10 years and you would like to nominate them, you can enter the Awards by visiting www.PAWAwards.co.uk from 13th April, and sharing why this little one deserves to be one of the PAW Patrol LittleHeroes of 2019.  If you are nominating someone else’s child, we ask that you seek the permission of the child’s parent first

At Kidtropolis there was also the chance to meet your favourite Paw Patrol characters. As you can guess this was really popular for all the fans of the show.

Whether physical or emotional, do you know a little one who has shown unusual strength? They may have been brave, tough or strong.  We’d love to know what they did and how proud you are of them!

Has a little one you know shown outstanding courage.  Did they face their fears or help others through a courageous act? Please tell us what happened and why they deserve this award!

Sometimes, loyalty is tested and it’s not easy to do the right thing by others! It might mean missing out yourself or upsetting another. But if you know a little one has shown remarkable loyalty or willingness, do let us know.

Has a little one helped the community?  Have they taught you a thing or two about saving the planet or shown inspiration, or wisdom or come up with a brilliant idea? Tell us why your little patroller is a shining star!

Has your little one proven a responsible leader? Was there a time when they unexpectedly stepped up to the mark to lead, shown confidence, maturity or set a great example? Whether at school or at home, we’d love to hear!

Has your little one helped or supported a friend or family member in need or just been incredibly kind to others? Tell us how they have been a great friend or about their generosity and kind heart.

Everyone needs a little help at times and often kids are not always first to offer – but if you have a special little assistant in your life then please share what makes them your helpful hero!

Do you know a child who is a hero who shows kindness above and beyond to the animal kingdom? Tell us how this child is a friend to pets or animals whatever their shape, size or wherever they live!

After that, we explored the rest of the rides and attractions at Kidtropolis. There is a morning or afternoon pass or you can go for the whole day. We found there was more than enough to do. The girls enjoyed getting a ride on Toothless from How To Train Your Dragon. They made pretty terrifying Vikings.

Next they had a cuddle from Pikatu and learning about the DS games.

One of the highlights for the girls was meeting the stars of the CBBC show The Dumping Ground. This is their favourite show and they were a little star struck to meet Kia Pegg who plays Jodie and Ruben Reuter who plays Finn. They were really kind and the girls wanted to line straight up and chat to them again.

There are several stands where you can play with different toys. There is a really large Brio area for children who love trains. The girls were interested to try out the Gravitrax interactive system. This is a modern spin on a marble run. You can build all sorts of slides, jumps and even a loop the loop using the power of gravity.

The best attraction of the day was the roller rink. It was a bit tricky getting everyone kitted out in their roller boots and safety equipment but we all had fun skating on the rink and it was nice for the twins to try something new. They loved it so much we went on twice.

There are several rides, including some bumper cars which have an added feature of water guns for the last minute. Super fun.

Once you are inside, all the rides are free. This means you can go on them as many times as you want. We were really impressed with how calm and relaxed Kidtropolis was, it felt much safer than a fun fair. It was a lovely atmosphere and the queues were really short. We walked on to most of the rides, including zorbing, a bouncy castle assault course and of course the carousel. The girls took part in a flossing competition where everyone won a goodie bag. We also enjoyed several shows, a Fire and Ice Science show, West End Kids singing and dancing to some of our favourite musical hits and Sam and Mark from CBBC.

Kidtropolis was a brilliant day out, perfect for children under 12. There was so much to do and it is a lovely opportunity to meet some of your favourite characters.

Kidtropolis tickets are priced at £12 for a four-hour session or £18.00 for two four hour sessions

Disclaimer: We were given tickets for the day for the purpose of this review.