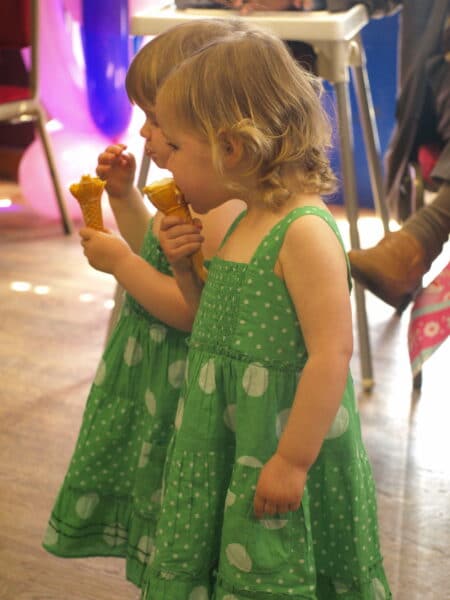 My daughter’s 5th birthday is this week and her party is on Sunday. From the start she said she wanted a magician party (I blame Peppa Pig)  and we spent ages looking for a different venue to host it, that would be suitable and a bit different. Of course it doesn’t really matter but it’s nice not to do exactly the same as everyone else, I do like to be different. We sent out the invitations last Monday and when she brought her book bag home we were surprised to see invitations for the week before her party – at the same venue. I suppose it isn’t that much of a coincidence as the other child goes to the same ice rink next to the party venue.

This weekend I had serious party envy. Yesterday we went to the party and it was A-MA-ZING. Everything you can throw at a party they did. Balloon animals, a bouncy castle, a room with a candy buffet where you could choose your own sweets, an all you can eat ice cream stall, party games, a DJ, room sized giant balloons, a chocolate fountain bigger than me, five or six pinatas stuffed full of treats and toys, and a delicious curry for all the adults to eat. Like I said – amazing!

I tried very hard not to be disappointed. I know you should never compare yourself to others, but it’s tricky when it is the week before in exactly the same place. I would love to be able to invite everyone we know, but we’ve had to restrict it to some school friends and family. I would love to have a bouncy castle and all the other amazing things but our budget just won’t stretch that far. Of course the children don’t care. They would be happy with a room full of balloons, as long as they get a cake and a party bag at the end.

I’m trying to be sensible and grown up about it. It’s just suddenly my idea of homemade party bags and star-shaped biscuits doesn’t seem to cut it. What if the children take one look at the room and say, “where’s the bouncy castle.” I know, in the scheme of things it’s just a party, but this will probably be it: the party. I doubt we will do her a big party next year and it’s not long before they just want to go to the cinema and pizza hut.

I find myself wondering how much it would cost to hire a ball pool or a trapeze artist, perhaps if we don’t eat for a week, or sell one of the twins (who needs two toddlers, it’s just greedy) we could take everyone skating afterwards.

Right I’m off to see if anyone has Mr Tumble’s number.