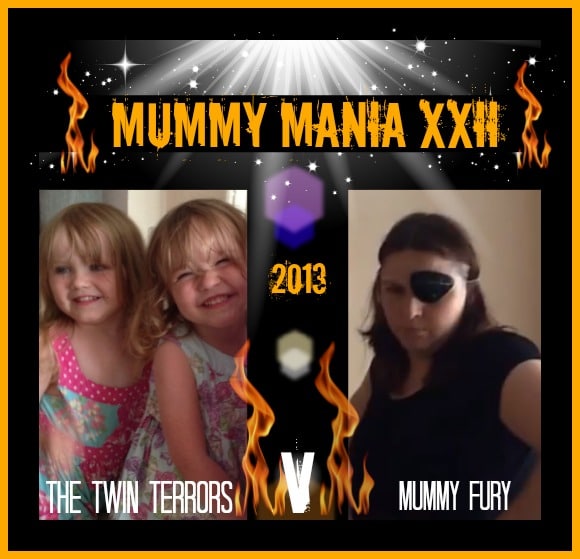 We are delighted to announce a LIVE Pay-Per-View event brought to you by Mummy Mania (MMM). Coming direct from My Sitting Room you can witness the grudge match between Rebecca AKA Mummy Fury and the, as yet undefeated, tag team the “Twins Terrors”.

You have never seen a battle like it. There will be 100% more foot stamping, pouting, tantrums and screaming than in the WWE UK tour 2013.

Today saw a stunning defeat by the Twin Terrors. Mummy Fury took a brave stand insisting that they wear all their clothes to school, including socks and knickers. At first it looked like a walk over as the twins both attacked, trapping Mummy Fury in blizzard of shoes and socks. Somehow Mummy Fury managed to claw it back and get the girls ready for the school run with the right amount of foot and underwear between them. She glimpsed success and even started to do a victory dance. It’s never good to celebrate too soon.

Just as it looked like the battle was won and they would make it to school on time, disaster struck. It was raining! Tired from the previous battle, Mummy Fury’s energy was flagging. The twins saw their chance. One started the fight to not wear a coat and the other to bring all her teddy bears with them. The clock was counting down. If they didn’t leave the house by 8.30 the battle was lost. Mummy Fury knew she must concede the battle to be in with a chance of the ultimate title of Champion of the House.

Who will be named winner this week in THE SCHOOL RUN Battle? Tune in tomorrow and witness the carnage live as the mighty teams battle it out to the end. At 8am you will see the grudge match as they struggle over whether the Twin Terrors can watch another episode of Ben and Holly before breakfast. Watch out for a surprise appearance from the twins’ big sister and stealth fighter Super M.J. notorious for sneaking in at the last minute and tagging in behind the umpire’s back to attack Mummy Fury. Her weapons of choice are homework that should have been done yesterday and a surprise request for a fancy dress competition. Can Mummy Fury remain in charge? Come back tomorrow and see.

This month also sees some other unmissable events.