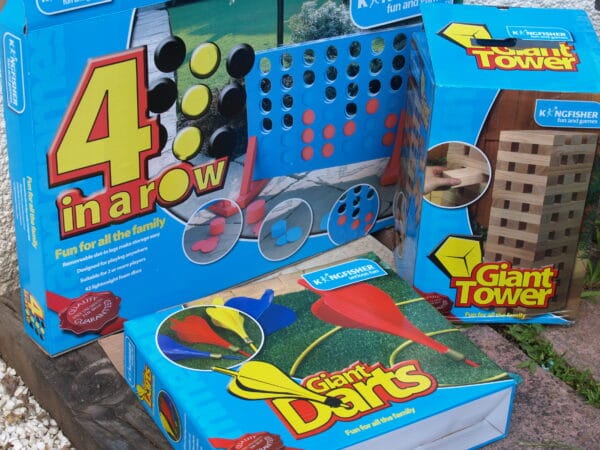 At the start of the Summer holidays we were challenged to have an Outdoor Game Day in an effort to get the family active and having fun outdoors,. We were sent a fun game pack full with a Giant Tower game, giant darts and a giant 4-in-a-row.

We chose a really sunny day and the girls had already had a dip in the paddling pool which is why their hair is wet. While they were playing I set up the games.

Other important bits and pieces

We started with a game of 4-in-a-row to cool off. This was even more fun to play outdoors than in. It is a great game to learn turn taking and to practice simple strategies. The twins are four and actually just like using it to make patterns.

While they played I set up the giant tower of bricks. This was definitely the girls’ favourite game. It is so much fun when the tower falls down.

Molly is getting really good at choosing which brick to pick. She also helps her sisters choose a brick but I think that is mainly because she doesn’t like them falling down.

This is a great game for the garden as you need the space and it doesn’t matter so much if it falls outside. Once they had finished with the game the girls enjoyed building towers with the bricks.

Our final game was giant darts. These were loads of fun although you do have to be careful as they could hurt.

All you have to do is throw the darts into the circles. There was one colour each.

the girls did well although this picture shows I need to sort out the weeds in the grass. Oops.

We had trophies and medals for the winner of each round.