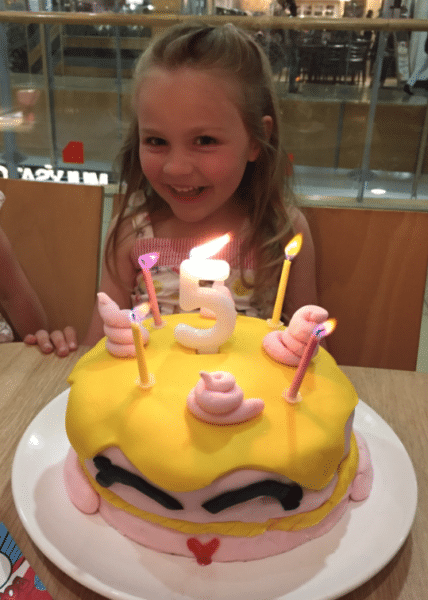 I can’t believe we are finally at this point. The twins have turned five. I’ve tried very hard not to wish time away but to be honestI’ve looked forward to the date they officially left the baby years. Lovely as they were as babies it has been… how can I say it diplomatically… a challenging few years. Five is a huge milestone. They are proper little people with separate interests and minds of their own.

To prepare them for their birthday I made them a birthday countdown of books. These all had a birthday theme. They did realise half way through that the books were from our bookcase but they didn’t seem to mind. It was a fun way to count down to their birthday as they could see the pile of books going down. Come back later and I will share all the books we included.

One thing I insist on is that the girls both have their own cake. No, don’t be silly of course that isn’t because I want to have double the amount of cake in the house – what an idea! Every other child gets their own cake, so twins should too.

This year they wanted a Shopkins cake and a Minion cake. This division shows how they like to keep their interests seperate. They are definitely developing their own likes and dislikes.

That doesn’t mean they won’t help each other blow out their candles.

Even when their twin doesn’t really need any help!

Of course as well as two cakes, there are also double the amount of presents to buy. The twins decided they wanted presents rather than a party. It always amazes me how expensive they are, luckily there are sites like VoucherBin UK to get a good deal. Again there was a definite division of toys, with Shopkins and Big Hero 6 on one side and Minions on the other. The only shared toy was Barbie.

I have to admit now they are five I was expecting a bit of a difference in behaviour. Whining has not disappeared altogether, nor has bickering. You can’t have everything I guess. There are a few differences. They are definitely working on a few essential skills ready to enter Key Stage 1 in September. Nope they haven’t been working on reading and writing.

However, they have mastered the art of photobombing.

Although not quite there with the #duckface #selfie. Maybe they will have got it by the time they turn six.