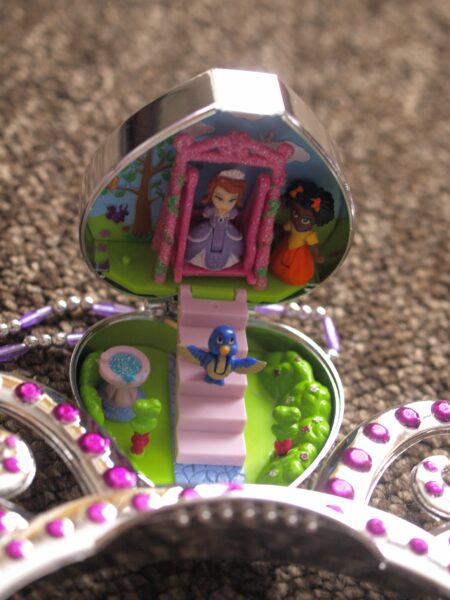 We were sent a couple of play sets from the Sofia the First micro jewellery range. Here I am going to show you the adorable Tiara Playset and the Amulet Play set

This is a lovely set which would be great for any Sofia fan. It doubles as a jewellery set and also as a toy as there are little Sofia characters which can go in the amulet part of the tiara.

The amulet can slot on and off the tiara and inside is a sweet little garden scene with the magical swing set, some stairs and a fountain. It is really magical. There is a small tab so you can attach your Sofia figures and they won’t fall off. The set comes with 3 micro figures but you can use any of the figures from the other sets.  I love the little bluebird figure – he is very cute!

Once you have taken the amulet off the tiara you can wear it as a necklace. The girls preferred this to wearing the tiara as they found that a bit heavy. It is then great to carry with you and you have your toys there ready to play.

The Tiara Playset costs just £12.99 which is a great price for such a fun toy and will sure to be a big hit with Sofia fans.

This is a really special toy and one which the girls loved and thought was truly magical. They don’t have anything else like it.

This is a large amulet which looks just like Sofia’s on the show but a bit bigger. It can be worn around your neck so you have your toys with you. When you open the amulet there is a beautiful palace scene inside. There is even a little boat. The set comes with three cute Sofia figures.

The girls were amazed that there were secret doors behind the palace scene which open out to show the inside.

There is also a second set of doors which fold down giving a little dance floor. You can press a button to get some sounds as well.

This is such a clever toy. there is even a stand on the back so that you can play with the figures without it falling over. The set costs £19.99 and is definitely worth the price as it is so cleverly designed.

See also our review of the Sofia the First Bracelet Playset.