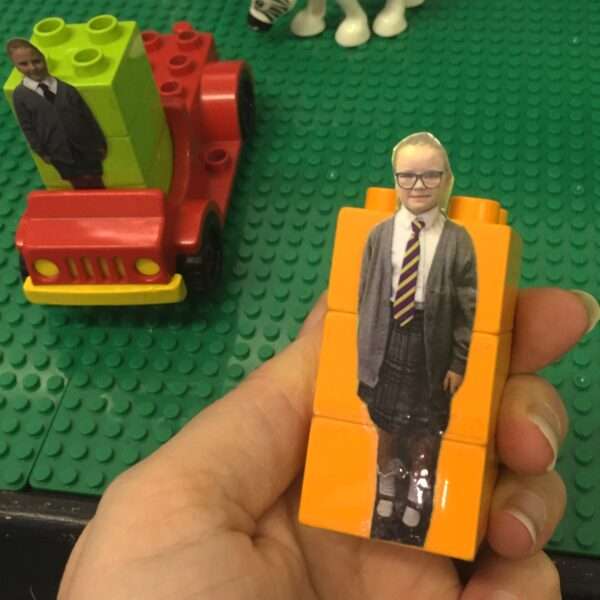 When the girls were little we spent a happy afternoon making princess peg dolls. We added a little photo to a peg and they decorated them in princess clothes. They spent hours playing with them but I was always a little disappointed with the effect as it didn’t look quite right. I decided it would be better to use a wooden block or small LEGO tower instead.

This is so easy because all you need are some photos of the children, then laminate them or cover with contact paper if you don’t have a laminator. The stick to a block or a tower of bricks with some Sellotape. I made some for the whole class and it only took about an hour and a few laminating pouches.

The best way to print is to print wallet-sized photos, most printers will do this for you. We used a smaller size for the ones we put on the LEGO bricks. It used 3 square bricks, this left the head hanging off so next time I made them with four bricks which worked much better and meant they didn’t get too damaged. Some children in my class played with them constantly so the stronger the better.

The best thing about using bricks is that you can stack them. This would be great fun for counting or measuring activities. We also used the mini-me figures for positional language “Put the toy on the house,  next to the zebra, under the bridge.” It would be lovely for a child learning a foreign language.

I love the fact that you can put the characters into vehicles. This is such a brilliant way to stimulate children’s imagination. They are the ones driving the train or the tractor. It really brings situations to life.

I’ve always wanted to fly in a helicopter and now I can.