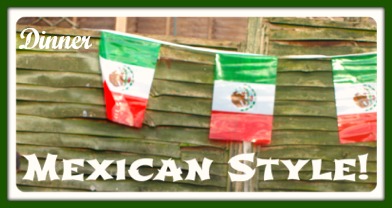 Now the twins are two I am so pleased to finally start introducing some meals which we used to enjoy before we had kids. I always loved cooking chilli as it is such an easy meal to make and prepare but it is so messy and with the spice I didn’t really want to give it to the girls until they were old enough.

This was such a great meal to make as part of the 12 Dishes series. Although the children didn’t help me make the chilli sauce they were involved with putting their tortillas together . This meant they were so excited to start eating and we had clean plates all round.

I encouraged the toddlers to help make their own tortilla wraps. They each had a little bowl of the different parts of the meal and they could put in what they wanted.

The twins really enjoyed the squirty bottles of Mexican sauces I had bought. This made it a bit easier for them to make their own, although I don’t think the taste was as good as making or buying it fresh. They needed help rolling the tortillas, but Molly, who is five was able to do it on her own. I had bought mini tortillas and this was brilliant for two year olds as they were small enough to pick up easily.

They really loved this meal. It was lots of fun and not as messy as I had anticipated. They also loved the lettuce which I was surprised about.

What better way to round off a meal than with a piñata?! We enjoyed playing with this at the end of the holidays! The girls loved finding the sweets stuffed inside, although they were a little scared of the hitting part!

Welcome to “Around The World in 12 Dishes”. We will be taking you on a journey around the world, (loosely) following in Phileas Fogg’s footsteps, exploring 12 different countries with our children, by cooking 12 dishes with them. One for each country visited.

The world is such a wonderfully diverse and colorful place. Our children see maps, flags and books. They see postcards and maybe they see films about the world.. but let’s really bring it to life through food! Taste and smell don’t often get explored, we think this would be wonderfully fun and interesting for you and your children.

Not only is it an exciting and different way to learn about cultures, but cooking with children brings a host of benefits – from numeracy to science. How can you beat that?

Around the World in 12 Dishes

We had started our journey the same way Phileas Fogg did in London, UK, and Stockholm, Sweden, then continued on to Moscow in Russia and via Indian New Delhi reached Tokyo in Japan. After making a stop in the exotic location of Papeete, capital of French Polynesia, we have now reached Mexico City!