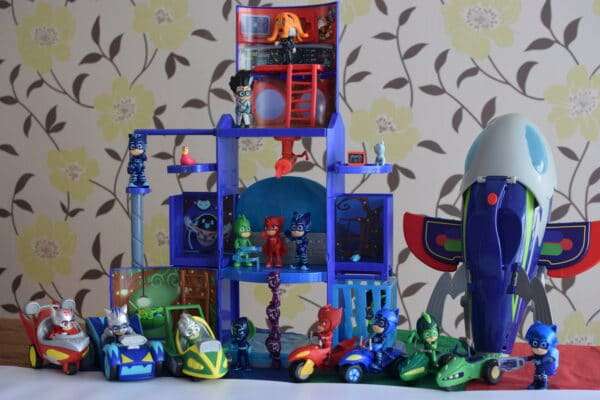 Now it is the middle of October have you started to plan Christmas yet? If your child loves the popular TV show PJ Masks then a toy from the new range from Flair/Just Play is bound to be on their Christmas list. This review will show you the top toys to buy. There is something to suit every budget, but all these toys are bright and colourful with lots of fun interactive features. When we unpacked the box, the kids kept gasping, “this is so cool.”

If you are looking for a big show stopper present then the Mission Control HQ Playset is guaranteed to delight under the Christmas tree. It looks really fun and engaging and stretches to three levels giving children lots of room to act out their favourite scenes from the show.

The set takes a few minutes to set up and has the batteries included. It was easy to put together, although there is lots of tape and fasteners so it is easy to miss one and wonder why it won’t open. When you open it out the playset is really tall, but you can fold it back down for easy storage.

You get two figures with the Mission Control HQ Playset, the hero Cat Boy and a villain Romeo. This is a great start to lots of fun adventures, but it would be worth getting a couple of the other figures to play with as the game won’t be complete without Owlette and Gekko. The figures are well made and really detailed. They look just like the cartoon.

There are lots of fun things to explore in the set. Charlotte particularly liked the secret trap door which drops into a lightning bolt cage – a great way to catch the villains.

She thought it was hilarious watching them drop through the trap door.

There is also a torpedo launcher in the roof which actually fires to keep enemies away. There is a control panel which plays sounds from the TV Show, this is the only part which requires batteries.  If you were only going to buy one toy from the range, the girls recommend you buy this one as it was their favourite. There were so many things to do.

The Super Moon Adventure HQ Rocket is a great addition to the range. Children love the idea of travelling to the moon and can act it out with this fun toy.

As well as the large rocket, you also get a Gekko figure complete with his own space rover which can launch from the bottom of the rocket at the touch of a button.

Inside the cockpit is space for three figures.

You can fold the legs and ramp and blast the rocket into space. It is a great toy for taking with out with you for the day, for example for a day at the grandparents, as you can fit everything inside.

Press the button for lots of sounds and lights.

These would be a good addition to one of the larger playsets as you get another vehicle. The speed boosters are large vehicles with a separate matching figure. You could collect all three and race them.

We liked the fact that the figure which comes with the Speed Boosters can be played with on its own as well as put on the vehicle. They have a different design from the figures in the other sets as they are wearing silver helmets.

The vehicles have matching colours to the figures and go really fast when pushed.

They work best on a smooth flat surface. So many children love to play with vehicles and these add a lot of fun to their games.

If you want lots of different figures to play with then the Delux Figure Set is the best option as it comes with all the characters from the TV show as well as animals and accessories, a whopping sixteen pieces in all. I like this set as you could use it with any houses you already own or even make your own small world for them to play in.

We like the fact that there are all three villainsRomeo, Luna Girl and the Night Ninja. This means there are so many different situations you can recreate, or invent your own. We particularly like the stackable Ninjalinos. These cute characters featured in the girls favourite recent episode and the little toys are really cute. You can place them on top of one another for lots of Ninja fun.

Each hero and villain figure stands 7.5cm tall and comes with poseable arms and legs to help promote imaginative play! They are bright and colourful with lots of detail and texture.

The girls particularly like the animals, a cat, Gekko and chicken (we’re not sure why Owlette has a chicken!). They also like the orange slime which comes from Night Ninjas gun, you can put it on any of the figures and pretend that it is trapped.

If you have a smaller budget in mind then the Super Moon Adventure Space Rover sets are fantastic value for money. A bit smaller and lighter than the super booster vehicles, these are fun to play with and move fast.

The figures also come with a matching accessory. The girls like Owlette’s little laptop.

You could use the Super Moon Adventure Space Rover sets with the Mission Control HQ Playset or simply to race.

If you want individual figures to play with or to add to a larger playset or just to have on their own then the Super Moon Adventure Figures are perfect. They have a helmet and a darker costume as well as some cute accessories.

The figures have a button on the back to make it light up.

The Cat Boy figure even has a tablet with a picture of the moon rocket on it.

The girls enjoyed playing with all the PJ Masks toys. There is so much scope for adventure and imagination. You can find the range of toys in all good toy stores and Amazon and Very.co.uk

Join us for a Twitter Party on 17th October with www.ukmums.tv  at 1pm where you can learn more about the range and even win some prizes.