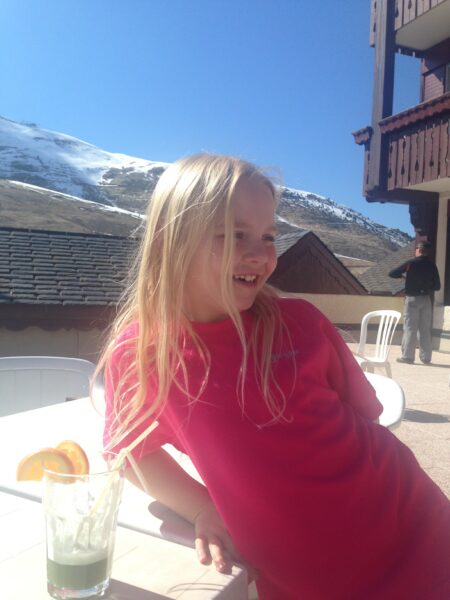 Before we went on our Mark Warner ski holiday to Les Deux Alpes, we were not sure if we would use the childcare. It is just something we had never considered on a holiday. The main thing I knew about the holiday company was that the childcare is excellent. They employ qualified English nannies who will take great care of the children.

When we arrived at the hotel it was apparent straight away that care for the children was a top priority. As well as a cute welcome note there was a meeting from the head of childcare to explain what was on offer. We were really impressed with how flexible arrangements were and how safety conscious the staff were. There was a secret code when you picked you children up, but they could go to the kids club any time they wanted during the day and you could pick them up whenever you wanted too.

Childcare was available from first thing in the morning. This was perfect if you wanted to head straight out for a day skiing. If children were enrolled in ski school then the nannies would collect them outside the hotel and make sure they were taken to their lessons.

The nannies then collected the children from lessons and took them for lunch at the end of the morning. They could then join the kids club for their activities. This suited Molly perfectly. She looked to see what was happening in the afternoon and then stayed for a bit or we picked her up straight after lunch and took her swimming or went up the mountain. It was brilliant it was so flexible as we could do what suited us. The children enjoyed having meals together with the kids club.

The twins are only four and we were not sure if they would want to go to the childcare or not. They absolutely loved it and made some little friends. The mini club had a range of fun activities with lots of arts and crafts.

The twins really liked the face painting session. They also enjoyed playing with the water and the little Wendy house and doing puzzles and arts and crafts.

One of their other highlights was a trip to the town for crepes. The girls enjoyed taking us out the next day and showing us what they had done.

Molly loved the Kids Club. At the start of the week, she had wanted us to pick her up straight after lunch but as the week went on we had to drag her away. She really enjoyed making Mocktails, especially as the bar staff would make her recipe for her. She also enjoyed practicing and performing a dance for the parents at the end of the week. The thing she liked best was the kind caring staff who let her plait their hair and who really built her confidence over the week.

One of the other things we all loved was the movie club. We took the girls to the restaurant a couple of nights to eat and while it was lovely to eat as a family it was a bit late for them. On the other nights, they went to the Movie club ran by Childcare. This is included as part of the holiday, along with the children’s High Tea. This was a lovely idea where the children went and watched a movie in their pajamas. It meant we could actually spend time as a couple. It worked well for us because the girls relaxed before bed and actually settled down much quicker and went straight to sleep. The other nights they were too excited and it was really hard to get them to sleep.

At the end of the week, there was a presentation made by the staff. They gave the children awards and a picture they had made in the kids club. It was a really lovely end to the week.

We really appreciated the Childcare on our holiday. We had thought that it would mean we didn’t spend much time together but actually it was so flexible it meant we could all do something separately and then come together and actually enjoy being a family. The staff were so friendly and caring I was really happy to leave the children in their supervision. The girls had such a lovely time in the kids club it really added to their holiday and made it a memorable experience for them. It is one of the main reasons I would recommend a Mark Warner holiday to other families.

Disclaimer: We were given the childcare as part of our review holiday as Mark Warner Mums.