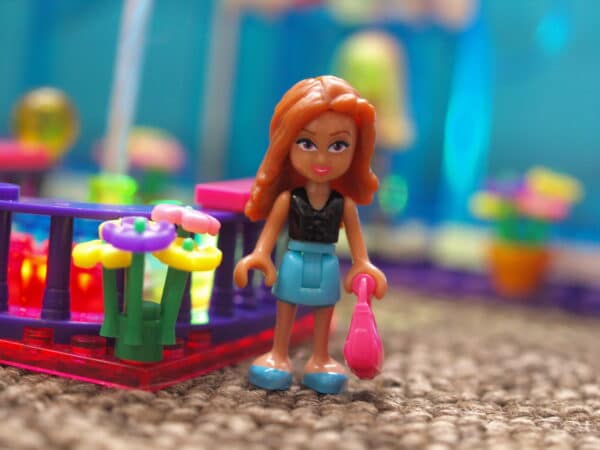 The girls were really excited to test the Lite Brix Sunset Island Mall. We had seen them in the shops and they liked the fact the bricks lit up.

Everything is packaged in bags and there is a worryingly large set of instructions. Luckily the instructions are clear and easy to follow – even I can use them and I hate following instructions. The bricks look really colourful and the girls loved the combination of pinks and purples.

Check out other lighting products for building blocks here on Amazon.

It took about an hour to construct the Lite Brix Mall, hampered slightly by the fact the twins wanted to play with it while I was making it. Molly is 7 and was able to follow the instructions to make the shops on the side. She needed a bit of help to put some of the bricks together. However I found the bricks in general were really well made and easy to build with. They were strong and the mall didn’t fall apart easily.

Once built, the mall looks great. There is a battery pack which lights it up making it look really realistic from outside.

The mall is really detailed. There are lots of stickers which finish it off adding details like nail polish and sale signs.

The girls favourite part is the moving elevator. It is a great way to get the figures to the top floor cafe.

I really like the way the battery pack is hidden. It is made to look like a fish tank by being put inside some transparent bricks with some stickers of fish on the front. The battery pack takes 3 AA batteries which aren’t included. The lights change colour which looks great.

There is another set of lights hidden in the fountain display at the front. These take 3 x LR41 which are included.

There are lots of flowers to put outside the mall.

The Lite brix figures are really detailed. They are easy to move and have sweet accessories like handbags and phones.

Once the mall is built, it is fun to play with. I would have preferred less stereotypical things at the mall – like a bookshop. Instead there is a hair salon and a shoe shop.

There is a revolving door which actually works to get you in the mall. This is made from transparent blue bricks which look fantastic with the glowing lights in the background.

Although the set is for children aged 6+ this is mainly for the building. Younger children can join in to play with the set once it is built. It isn’t suitable for children under 36 months because of the small parts.

Once built the Lit Brix mall is quite big. It is a really good toy for a couple of children to play together as they can take on different roles. The mall costs £49.99 and would be a great Christmas present. The bricks are compatible with other building systems so they will fit in really well, you can also buy other sets in the series to have a giant shopping centre. We would definitely buy other sets in this series and I would also buy them for presents as the lights add an extra dimension which makes the set look really fun.

Disclaimer: We were sent the mall for the purposes of this review.