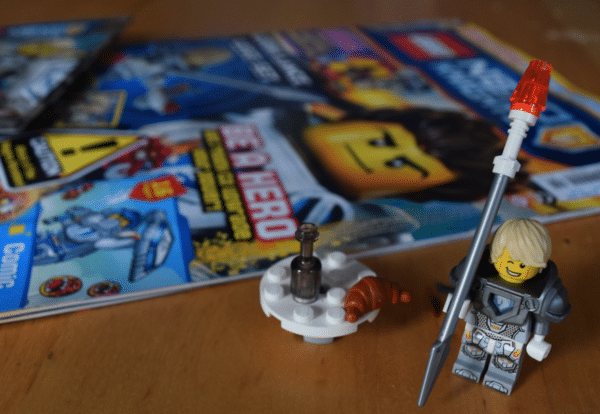 A brand new magazine for Lego fans has been launched today. It has a fun castle theme and is based around the new lego sets of the same name. In the sets, there are robo horses, catapults and of course, a baddie called Jestro. The magazine is aimed at children aged between 6 and 11 years old.  Although mainly aimed at boys, I found my girls really enjoyed this magazine because they love Lego sets so much. They really liked the castle theme and the cartoon style of the magazine.

Inside the magazine, there are lots of fun activities including, news, comics, hero facts, puzzles, posters, competitions, and colouring. It would be a great magazine for a reluctant reader because it is presented in such a bold, fun way and the reading is split up into manageable sections. We found the stories in the comic section really exciting and fun to read.

There was a lot to read in this magazine. It is a good magazine to give you  There are lots of different heroes as part of the series. Clay leads the Nexo Knights, which include Macy, Lance, Aaron, and Axl. The magazine gives facts about each character which will make playing with the Nexo Knights toys more enjoyable.

The first issue of the magazine has a mini figure of Lance on the cover. He has a high opinion of himself but is a bit lazy. He comes with a lance (of course) and a few other accessories. Of course, a lot of children are only interested in the toy on a magazine and they will really like to collect the figures which come with it. The good thing about Lego is that you only need a few mini figures and then you can make your own game using your other bricks.

The magazine will be on sale every 4 weeks. The normal issue price is £3.25

Disclaimer: we were given a subscription to the magazine for the purposes of this review.