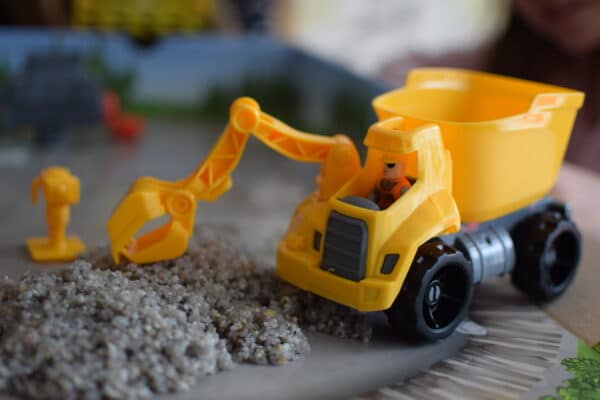 The girls love trying out new toys for sensory play. They were really excited to try the Kinetic Sand Rock Crusher as they had not tried Kinetic rock before and it looked really fun. They were not disappointed and it was a really great toy to play with on a wet September day at the end of the Summer holidays. I loved the way it got their imaginations working.

The best thing about the Kinetic Sand Rock Crusher is the kinetic rock. Once you pour it out, you have to play with it a bit so it becomes soft. The box then comes with everything you need to play including:

This means as soon as you get the box you can get started and don’t need any other equipment.

The kinetic rock feels really amazing. It would be great for children who love to play with different textures, for example, if they enjoy making slime. It is made from lots of tiny pieces of rock which stick together so you can make all kinds of buildings and structures.

Children love to build and to make their own worlds, and this set really encourages this. They can build anything they want using the kinetic rock. They can use the rock crusher to make their rock into different shapes. They can use the dump truck to move the kinetic rock around. The little figure a great too as it really encourages role play. After the girls had been playing for about an hour, they added their own toy figures to the play and created their own small world.

One of the biggest worries parents have with sensory play is the mess. Kinetic rock is not messy as long as they keep it in the box, as this acts as a playset. If you have dropped some kinetic rock then you can just roll it into a ball and use it to pick the stray bits up.

Although this is a small box, the girls played with it together really well. It actually encourages collaborative play. This is one of the best toys we have tested recently because of the amount of time the girls used it. The kinetic rock never dries out, so you can use it again and again.

The Kinetic sand rock crusher costs just £19.99 which is a brilliant price for a toy which comes with everything you need and which you can get hours of enjoyment out of again and again. You can also buy a feature pack of 6oz (170g) of Kinetic Rock, containing a construction accessory. This is a great way to extend the play and comes in three different colours, red, grey and gold. The girls have already decided to spend their pocket money on these feature packs at the end of the month.

Disclaimer: We were sent the toy for the purposes of this review.