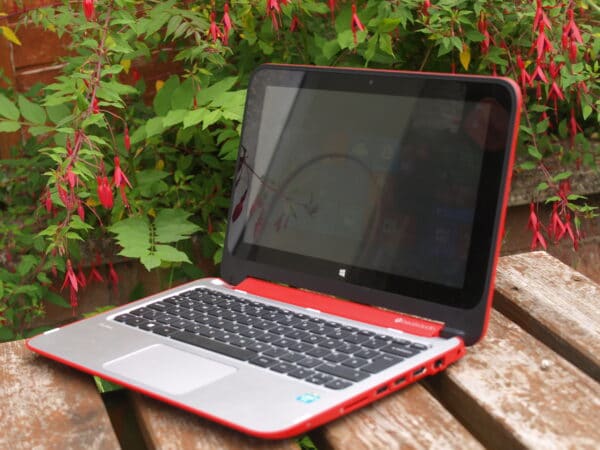 Are you looking for a new computer but can’t decide whether to get a laptop or a tablet? HP have come up with an innovative solution the HP Pavilion x360 which combines the best features of both. This is a convertible laptop which costs just £329 making it a really affordable option for families.

The Pavilion x360 is really attractive looking. It has a bright red case (it also comes in silver) and sleek finish with only the HP logo on the front. The 360 feature is very clever and works smoothly. You can use as a normal laptop, flip the cover completely over so that it is a tablet or fold it into a tent shape so that a few people can use at once. This is a great feature for families. The girls can put it on it’s side and watch a video or fold it right over and play a game.

The HP Pavilion feels very sturdy and is robust enough for me to let my 4 year old twins play with games. It is surprisingly light though. It is 1.4kg weight and 22mm thickness which means it functions well as a tablet, although not as light as an actual tablet.

There are so many applications available from the store and they are really quick and easy to download. It takes a little bit of time getting used to the Windows system but you can also have a normal desktop screen. The Windows screen makes it really easy for children to use as they can see all their favourite applications when it loads up. There is 4 GB memory and 500 GB storage which is more than enough to get a good range of applications to play with.

One of the best things about the fact it is a laptop and a tablet is that you get both a touchscreen and a keyboard. The children are so used to using touch screens that thy find it hard to use technology which doesn’t have that capability. It also helps when you are trying to click on something small and makes it easy to scroll in or out on something. However it is so nice to have a keyboard. Much as I love tablets for social media they are not great for actually writing anything. The keyboard means this is perfect for blogging or writing emails and other documents.

The screen is a really good size for watching movies, at 29.5 cm it is big enough for two people to see clearly. The screen itself is adequate, though not the laptop’s best point. You do have to tilt it to get it in the best position. The sound, with built in Beats Audio™ and dual speakers, is really crisp and clear.

The battery life is good. It ran down quickly the first day we used it but once I worked out how to close down all the applications which were running it lasted much longer, about 5 hours over a couple of days.

We all really like this laptop. For under £350 you get a machine which is both a laptop and a tablet. It works brilliantly for social media, games and watching films or playing music. It is also a good machine for typing. It proves that sometimes you can have your cake and eat it.