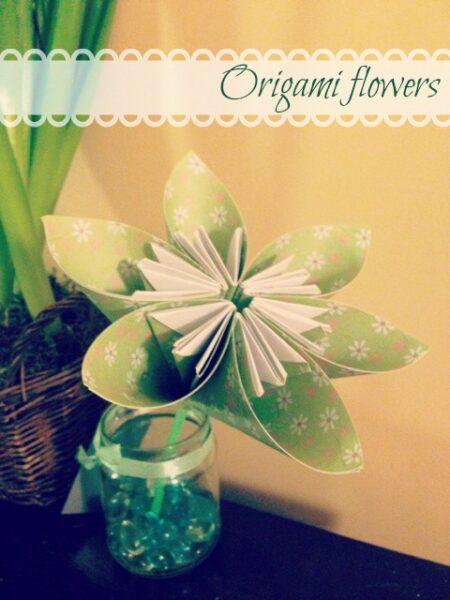 Origami flowers are really lovely for Spring decorations. They would also be a sweet present for Mother’s Day or for decorations at a wedding or party. Origami, from the Japanese ‘ori’ meaning ‘fold’ and ‘kami’ meaning ‘paper’, originated in Japan in the 17th century.

Origami flowers are so beautiful and I saw them being made at work and knew I had to get the instructions. At first I wasn’t going to write a blog post as I thought it might be a bit too tricky for the under 7’s. However, Molly (age 5) was watching me make some this evening and was desperate to have a go.

Origami Flowers That Kids Can Make

She managed every step copying what I was doing. The only part she struggled to do without help, was the part where you separate the petals and then squash them down. That is the trickiest part though.

She also needed a bit of help putting all the petals together.

How To Make Origami Flowers

To make origami flowers all you need are:

Below are photos of each step. I did this so I could show the children how to make their own.

First fold the squared paper in half into a triangle. If you are using patterned paper fold the plain side inwards.

Take one of the bottom corners and bring it up to the top corner of the triangle. Do the same on the other side.

Fold the side down so that it matches up with the bottom edge. Repeat on both sides.

Unfold the flaps and then squash flat along the crease you have made.

Fold down the triangular points on each side.

Then fold the sides inwards along the crease.

Put a line of glue on both of the two flaps.

Bring the two sides together and hold with a paperclip or your finger until the glue has dried.

This forms one petal. Stick the petals together putting glue on both sides. You will need to hold it in place for a couple of minutes.

Make 6 Petal For Each Flower

repeat the above process 5 more times to make one flower.

Try to make sure all the edges line up so it looks neat in the middle.

Choose Your Colours To Match Your Occasion

If you chose paper in Spring colours they make a great decoration for this time of year.

You can then put a few flowers together in a cone or you can attach a straw so they will sit in a vase.

Making origami flowers is a lovely past time. It’s meditative and brings a stillness when you’re in the moment. The Japanese have a word for this Meisō. Read David Lister’s work on Origami and the spritual connection.

The Italian, Vittorio-Maria Brandoni, who founded a school of origami based on Zen principles believed that origami should not just express and “empty aestheticism”, but rather an attitude to life and nature. Just as the practice of contemplation in Zen leads to enlightenment, so folding in the right way should lead to a “waking up” of our minds and hearts. But, he adds, origami is only folding paper – he who wants to understand it just has to start .