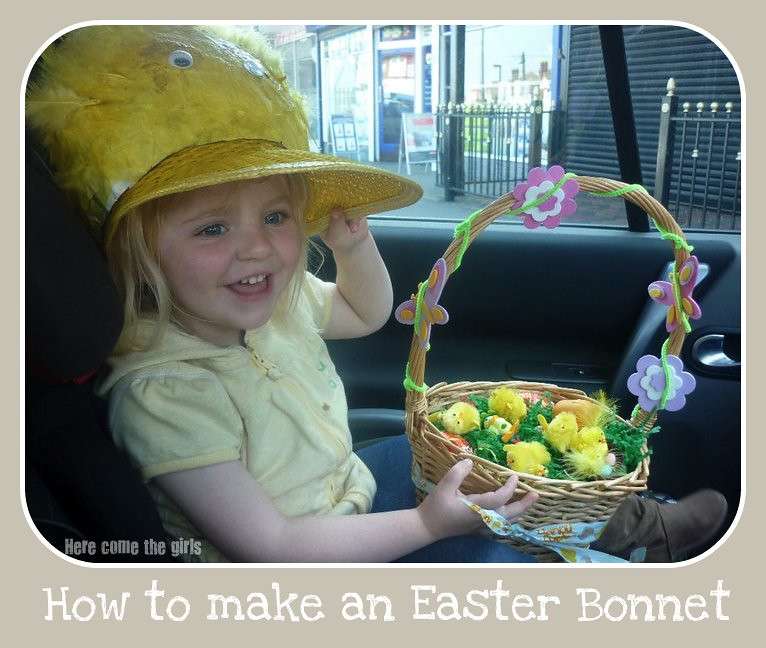 This time last year I had the fabulous idea to make a papier mache Easter Bonnet for the parade at her school. I also had 8 month old twins. I discovered pretty quickly that papier mache and infant twins do not mix. I tried to do it whenever they were asleep but papier mache needs lots of time and as soon as we had the glue out they would wake up. My overriding memory of that time was being covered in glue and holding onto to a wailing baby while the other one desperately tried to get hold of the newspaper. It was not my finest hour and made me realise sometimes you just can’t do everything.

Anyway, this year is another matter and I’m looking forward to making a bonnet in slightly less stressful working conditions. I have had to put this post together from two sources as I didn’t have a blog last year so only have photos of the end result. Luckily we have been making some papier mache this month, so I can show the process.

Papier-mâché is the French for “chewed paper”. The first step is to tear the paper into strips. Then you need to make up some papier mache mix. There are several ways of doing this, probably the cheapest is to use wallpaper paste. I prefer a mix of PVA glue and water because it dries quite hard and this means you don’t need so many layers. It’s also slightly shiny so good for a final coat.

Next blow up the balloon and stick it to a cup or bowl with sellotape. This will mean it doesn’t blow over.

Dip the newspaper into the glue and lay it flat onto the balloon. Cover the entire balloon and make sure the glue coats the whole surface. Give it several layers. Leave to dry overnight. Cover the balloon again. the more layers the better. This makes the papier mache as hard as possible. It is best to repeat for a third time if you have time.

Paint the bowl shape or add a coloured layer of paper or tissue paper.

We then turned this into a duck by sticking on feathers and googly eyes. We used a ready made straw hat with a large visor. I stapled the papier mache head onto it.

Easter Bonnet for a 4-5 year old