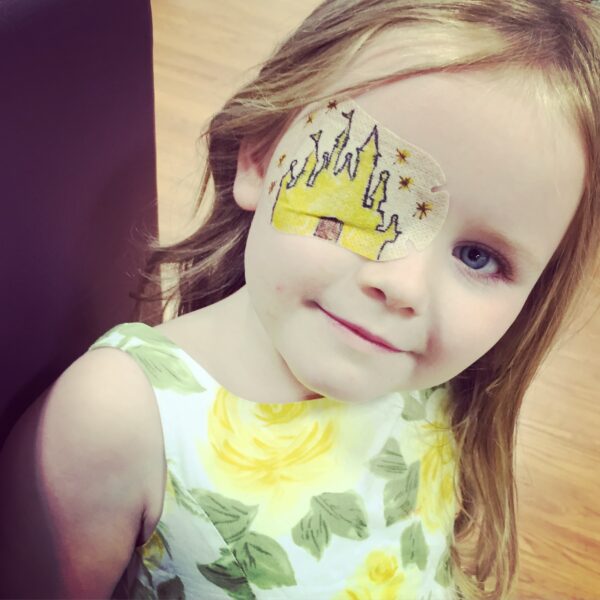 I was a bit worried a couple of weeks ago. Rose had her eye check after wearing glasses for three months and they said if there wasn’t enough improvement she would have to wear a patch. We had talked to her about it and she was really positive, however, I knew the reality would not be as simple. My main concern was that she has a real phobia of stickers and refuses to wear them, even hating me to have one on.

Luckily I needn’t have worried. She came back from her appointment proudly wearing her eyepatch. She needs to wear it for three hours every day because her left eye needs to be encouraged to work harder so she has to have her good eye covered. We were given a small box of eyepatches with funky colours and a large box of plain ones as well as a chart to stick them on after wearing them. We also bought one of the felt ones which slips over the glasses just in case she decides she doesn’t want to wear one.

Although most days, she is happy to put them on I thought a bit of encouragement would help on the days she just didn’t want to. I decorated a few of her plain patches with her favourite characters and she was a lot more excited to wear them.

The first had to be Minions – as the Minions biggest fan this was essential.

The girls have loved reading The Gruffalo in Reception. I drew a Gruffalo for her to wear at school.

The twins both love Shopkins. They chose this cute Shopkin on the next patch.

We went to Legoland Windsor this week. I made a lego themed patch for the journey.

I used Sharpies to draw these pictures on the eyepatches. They make a really bold cartoon design.

Rose wanted Tinkerbell on her eyepatch. I thought this was a bit hard so she chose a Disney castle instead. It had to be yellow because that is her favourite colour.

So how do you get a 5-year-old to wear an eyepatch? Put a Minion on it of course.