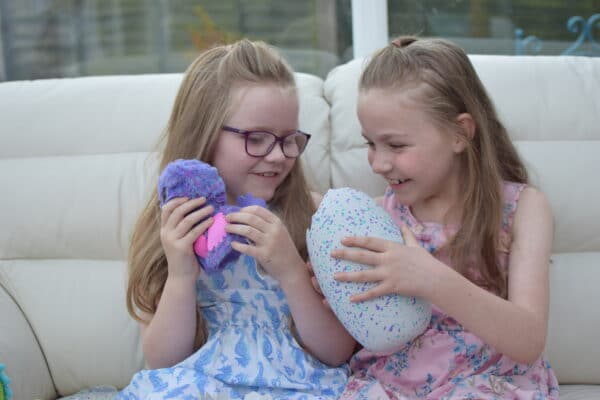 It’s been almost a year since we hatched our very own Hatcimals egg into a cute little guy. Now he is finally getting a little brother or sister with the new Hatchimals Surprise. If you haven’t seen the advert then this is the brand new toy from SpinMaster, set to be high on children’s wish lists this Christmas. But what is inside the surprise? The truth is a closely guarded secret. We were lucky to be chosen to be among the first to find out.

TheHatchimals Surprise egg has a similar design to the first Hatchimals egg. It is much taller though. The girls enjoyed wondering what could possibly be inside. they guessed a giraffe because that has a long neck.

The girls found the egg hidden in the garden, among the toadstools. It was an exciting moment!

The egg feels very solid and is quite cold to touch. Our egg was turquoise and purple making the girls think that a girl animal was inside as apparently that is girls colours.

On the bottom of the egg are some tags. As soon as you pull them off, the fun starts. You can hear noises and singing from inside and see eyes.

The egg responds to what you do. The girls enjoyed tapping it and it repeats the pattern. The girls heard two voices at once which made them suspect what might be inside.

This toy really encourages a nurturing instinct as the girls were so protective of their egg. It was so sweet to watch them.

The process of the egg hatching takes about nine minutes. There are rainbow lights and the birthday song plays and the egg starts to hatch of its own accord.

When the Hatchimals toy appeared they loved it straight away. They were so excited to see the colour of the fur and the cute eyes.

They quickly realised their guess was right. There was something else in the egg.

Can you guess what the surprise is?

This is Charlotte’s “It’s so adorable” face! She couldn’t believe how cute the Hatchimals were.

Here are the freshly hatched Hatchimals. We had Peacats. They are in pretty complimentary colours with cute kitten faces and little wings.

Their eyes light up to show different stages. Once you’ve hatched them you raise them through three stages from baby to toddler to kidThese Hatchimals have unique personalities, but they also love to play with each other. The twins share a special bond, reacting to one another – telling secrets, playing games, dancing and more!

The whole process is really exciting and it is lovely to see the Hatchimals interact with the children and each other. This is a great toy if you have two children as they will end up with one each!