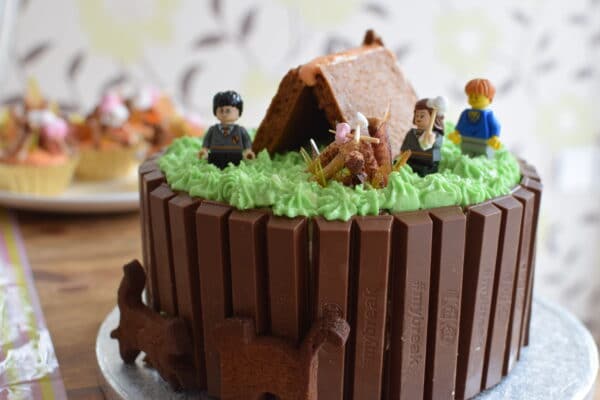 As part of Molly’s tenth birthday camping party we obviously needed a camping cake. First, we made a four layered cake using this easy cake recipe. I layered it up using buttercream.

We decorated the edges with a layer of buttercream and lots of KitKats. Then I added some green food colouring to the buttercream and used a star piping nozzle to pipe the grass.

We made some gingerbread and used it to cut some cat shapes for decoration and also two rectangles and a triangle to make the tent shape. We stuck this together using some orange buttercream icing.

On the top of the cake we made a little camp fire using twiglets and orange icing. The flames were made using bashed up boiled sweets which have been put in the oven on low. You can see how we made them here. On top of the fire, we put mini pieces of marshmallow stuck onto tiny pieces of cocktail sticks.

This looked good but the cake was a little bare. I used some Harry Potter Minifigures to add more detail. These make it look like the part of the books where the characters are camping in the woods.

This cake looks good but was actually pretty simple to make. You could make it easier by buying crackers to use as the tent or even using a toy tent if you have one. You could add other figures to make a camping cake if you did not want it to have a Harry Potter theme.