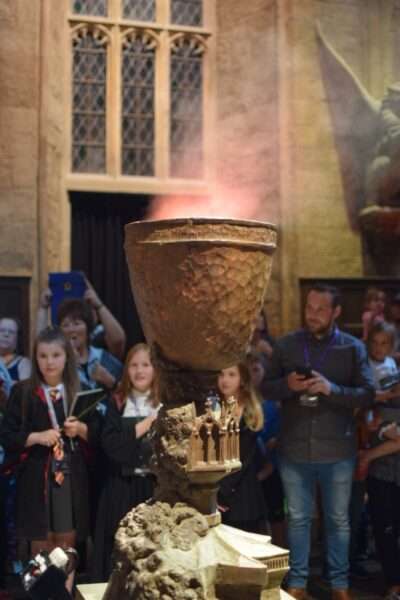 It’s so hard to choose a favourite Harry Potter movie, but if I had to it would be Goblet of Fire. There is so much action and adventure in it. Which is why we were delighted to be invited to the Blogger event to celebrate the launch of The Goblet of Fire being held at Warner Brothers Studio, London.  We were also thrilled as it was happening on the twins 8th birthday. It was an absolutely perfect way to spend their special day!

If like me, you love The Goblet of Fire, then now is the perfect time to visit Warner Brothers Studio Tour. You get to see all the usual behind the scenes props, costumes and sets but can also see extra things from the Goblet of Fire movie, which aren’t usually on show. When we arrived there was a special welcome desk set up which looked just like something from Gringotts Bank.

The first thing you see when you enter the Studio Tour is the giant Triwizard cup. It looks incredible and is the perfect way to start off the tour.

The start of the tour at Warner Brothers Studio is so magical. Stepping into the Great Hall is incredible and you really feel like you have been transported to Hogwarts. The twins got the special honour of pushing the doors of the Great Hall open as it was their birthday. This made their visit even more memorable.

Inside the Great Hall is The Goblet of Fire itself. The Weasley twins costumes are on display next to it, recreating one of my favourite scenes of the movie, where they try to put their names in the Goblet of Fire using an ageing spell to try and fool it. I find this scene quite moving as well as funny, as this is the only time the twins will be old together.

There is a live demonstration of the Special Effects from the movie where the names pop out of the Goblet of Fire. Smoke and light come from within the goblet and a name pops out just like in the movie. This was so much fun and everyone gets to take one of the names home as a souvenir afterwards.

The Yule Ball is one of the most memorable parts of the movie. I love seeing Hermione’s transformation and her stunning dress is on show, along with Ron’s dress robes. The detail in the pieces is shown in the beautiful ice sculptures.

Pictures do not do justice to the huge fountain from the Prefects Bathroom. It is so big and the colours of the water are really vivid with colourful water gushing from 53 taps. It feels like you are really in the movie.

There is so much to see at Warner Brothers Studio, it is easy to miss things. We almost missed seeing the golden egg which Harry steals from the dragon. It is so pretty and delicate. Find it opposite the Potions lab.

It would be hard to miss the haunting statue of Tom Riddles grave. This is the darkest part of the movie and it feels very creepy to be next to it. The girls wouldn’t stand next to the grave in case it started to move and held them trapped, like in the movie.

The final part of the tour is incredible with the model of Hogwarts itself. It is the vast model used in the films and so detailed. Now you can see the Beux Batons carriage flying past.

We took home some lovely mementoes of our trip. The gift shop is full of amazing things and we wanted to buy everything in the shop. The Official Guide is packed full of images from your visit and has lots of fascinating facts from the tour.

The girls were delighted to be given a chocolate frog. These look just like in the movie and have a hologram card inside. The frog itself is really large and made from solid chocolate which is so tasty. It is a great way to bring the movie to life and a sweet end to our experience.

Other Harry Potter Things We Love