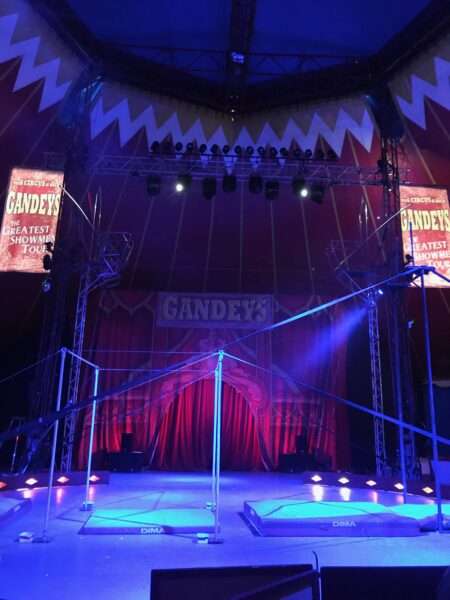 We had never been to the circus before the weekend. Gandy’s Circus Greatest Showmen Tour was brilliant for our first ever show. We all loved the movie The Greatest Showmen, the soundtrack is on repeat in our car and it had made the girls very excited to see a circus for real. Gandy’s circus is at Intu Merry Hill until the 4th November. It makes a lovely day out as you can go shopping and you can combine it with some fun at the Quest centre. It is easy to spot the big top which is in the car park at Intu Merry Hill. There are lots of different seating options available to suit different budgets but the seats are in the round so I think you would have a good view wherever you sit.

The tent is decorated for Halloween which is lots of fun. It is really exciting stepping into the big tent. We had a side view which gave a good view of all the action. We got to the circus just before the showtime. I would recommend getting there a bit earlier as there are no seat numbers so if you are first you can sit at the front of the section. I was a bit worried it would be cold as it was in a tent but it is heated and really toasty inside. The show got off to a fantastic start with an ensemble performance of The Greatest Show. The girls were up dancing and singing straight away joining in.

We really loved the aerial silks performance by Jacqui and Brendan. Just like in the film it was so romantic and beautiful. In real life, seeing the performers spinning so high in the air was breathtaking and far more thrilling. The final section has the performers spinning by their necks with a sprinkle of glitter. It was truly magical.

There is an interval and we had a traditional treat of candy floss, there were also burgers and chips available. Charlotte enjoyed having a go at the win a prize every time ball throw and loved the cute dog teddy she won (although she didn’t actually get any balls in). You could also buy balloons, get your face painted and have a go at the raffle so there was lots to keep you entertained.

The show had so many highlights. We loved the Havana Troupe perform with skipping ropes and a tightly synchronised routine on the gymnastics bars. The girls kept asking what the bike was and couldn’t believe the tricks performed on the high wires. They had never seen anything like it.

Another highlight was Las Chicas Morales, a pair of dancers who somehow managed to perform on giant balls and even get them to go up and down a track without falling off, like a human-sized marble run. There were a lot of gasps from the audience as we all worried whether they would be able to do it.

My favourite trick of the show was when one of the dancers got on a giant glitter ball. The lights shone around the tent like we were in a huge disco. Then the trick got even better when she was handed some flaming hula hoops to spin. It was a bit like a metaphor for life!

The clown Chico Rico was hilarious and Charlotte had to get a photo with him at the end of the show. His sections spaced throughout the show provided a funny break from the action and kept the audience laughing, often while the stage crew got ready for the next act. We found one section with audience members acting out a hilarious boxing match particularly funny.

We had a wonderful time at the circus and it was a brilliant first experience that left us buzzing.

Disclaimer: We were given a family ticket to the show for the purposes of this review.