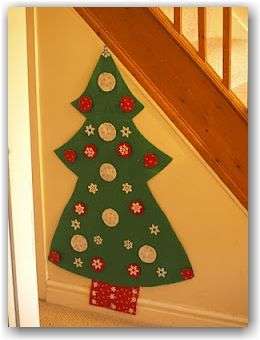 When I first started to think about Christmas, I began to panic about having two toddlers who would want to tear the baubles off the tree and throw them at each other. It was bad enough when Molly was eighteen months. That year, the tree was bear of decoration until half way up where she couldn’t reach. the thought of having yet another thing which would need constant tidying just filled me with dread. So I came up with this solution. I have seen the idea on interest. It is basically a big Christmas tree shaped fuzzy felt.

It is easy to make and you can make it without sewing at all, although you can sew if you want to. You just need different coloured felt. Cut a large green piece of felt into a Christmas tree shape. Then attach circular felt using velcro. You can buy this in stick on circles which makes it even easier. I also used some snowflake stickers.

It does look pretty, but you can guess what has happened, the twins have all but ignored it. Why would they want to play with something they are allowed to play with? Instead it’s much more fun to throw crayons on the floor and steal my purse and scatter the contents far and wide, so I panic every time I have to pay for something that my credit card will be there. In the end we have a tree as well, it is safely hidden behind the sofa and lots of boxes. It looks pretty silly but it keeps everyone happy.

Next year I’m going to number the baubles and make it an advent tree. If I remember.