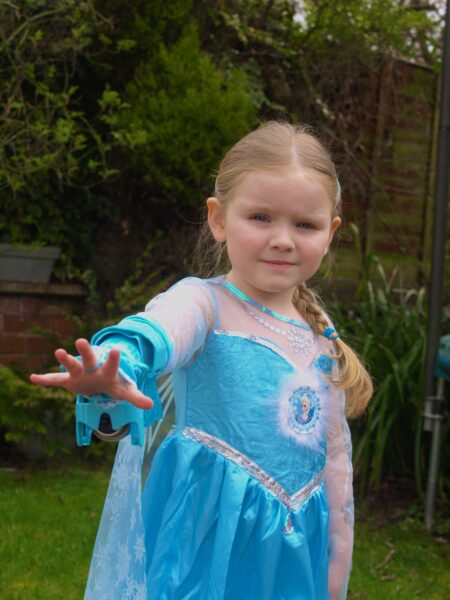 Frozen Fever has begun again. I thought we were free of this particularly virulent phenomenon but now it appears there is a new song and even a short video. Once again the girls are waking up and singing “Let It Go”. Perfect timing for us to try a new toy based on their favourite film.

One of the best things about Frozen is Elsa’s amazing ice powers. Finally a woman with call superhero abilities, and snappy dress sense for girls everywhere to emulate. So a toy which allows you to shoot out ice just like Elsa is going to be very popular.

We were sent Frozen Elsa’s Magic Snow Sleeve from Flair to review. This is a brilliant idea for a toy. It comes with a fake sleeve so you can conceal the source of your powers. Then when you are ready you can shoot out ice and snow.

Ok it isn’t real snow but actually it is more fun. The toy is really a hidden cannister of white silly string. When you press the Magic Snow Sleeve it sprays string out. This would be brilliant at a Frozen themed party! What a fun surprise for all the guests.

The girls had lots of fun with the Frozen Magic Snow Sleeve. Me not so much as they thought they had to fire it towards me for the camera shot.

The toy is suitable for ages 5 and up. It was a bit tricky for the girls at first but they soon got the hang of it. The only problem was they had used the whole canister of silly string up before I could video them. Once you have used the canister then there is a replacement water bottle. This will be great for water fights in the summer. I can see lots of role play happening. The perfect way to cool down on a hot day.

As well as the magic sleeve we were also sent an Elsa fancy dress costume from Rubies to review. This is a really pretty dress with a detachable cape. It has lots of sparkles and jewels but is still really comfortable to wear and easy to move around in – something which isn’t true of other Elsa costumes we have tried.

Rose loved this dress and was really disappointed to have to take it off at bedtime. This is the only outfit I can get her to wear – at least until she sees the green dress Elsa wears in Frozen Fever.

Disclaimer: We were sent the toys for the purpose of this review.