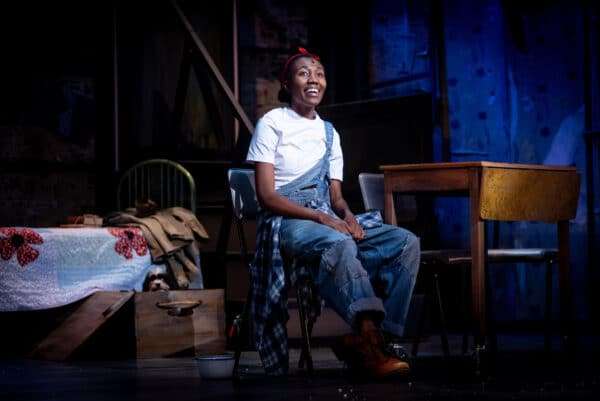 We arrived at the Birmingham Rep Theatre with two minutes to spare for the Wizard of Oz press show. I was so scared we would be late and miss it. We have adored every show we have been to see at The Rep and the Wizard of Oz was no exception. We are really spoilt for great theatre in the West Midlands, yet we always feel that shows at The Rep are something really special, the theatre is prepared to take risks and create something innovative and new. The Wizard of Oz is a visual treat the whole family will enjoy.

When we arrived there was some lively skiff music playing by members of the cast against a background of corrugated iron. This really set the scene perfectly. We were instantly transported to a farm in Kansas where the farm hands relax between shifts. The simple set of the farm building both inside and out felt so real that it made the whole story, even the fantastic elements seem like they were really happening.

There was one character who stole every scene he was in and he was small, fluffy with an adorable face. The girls couldn’t believe it when they saw in the program that Toto was played by a real dog.  There were audible gasps and a lot of oooohhhs and ahhhs from the audience when Dorothy appeared carrying a real dog. He was so sweet, we were instantly invested in the story as we couldn’t believe that anyone would want to hurt this lovely creature. Dorothy’s overwhelming concern for her pet was totally relatable and the audience was with her every step of the way, ready to do everything they could to save him. Dorothy played by Chisara Agor is impetuous and enthusiastic, not stopping to think before she leaps into action. Her heartbreaking rendition of Somewhere Over the Rainbow was mesmerising.

There are so many scenes which just blew us away but the tornado scene really stood out. From the flapping coats of the farm hands rushing to get in from the storm as the wind picked up, to the house being destroyed by a swirling tornado before our eyes, the threat felt very real indeed, especially with poor Toto caught in the middle.

The Munchkins provide a hilarious welcome to Oz. They are cute, funny and just a little creepy, setting the tone for the rest of the story. Their dancing and puppetry are incredible, I’ve never seen a puppet do a one-handed handstand before. Oz is a magical land full of vivid colour, towering plants and trees, and eerie animals and otherworldly creatures. The ensemble works so hard to bring it to life and it feels like you have been transported into another world. Toto has been magically transformed into an adorable puppet dog, although it really seems like it is a real dog. I was delighted by puppet Toto it gave me fond memories of the gorgeous puppets from last year’s performance 101 Dalmations.

At its heart, this is a story about the importance of friendship and family, a message which is important at any time of year but especially apt at Christmas. Dorothy’s friends who help her along the way are delightfully portrayed. The lion is sympathetic in her quest to be brave and become Queen of the forest, Tin Man is cool with hip-hop dance moves and the Scarecrow is adorable in his hapless clumsiness, and seems to have a bit of a crush on Dorothy.

To balance out the joyous fun there is a deliciously evil baddy in the form of The Wicked Witch of the West. You get a thrill whenever she appears on her broomstick, the umbrella from earlier in the show. The ghosts which lurk around her castle are truly terrifying, if you have a particularly sensitive youngster you might need to cover their eyes. It is recommended for ages 7+ and I think this classification is accurate.

There are so many things we loved about the performance I could write about it for days. The review really does write itself. The thing which made the play so innovative and fresh was the stagecraft and use of the set. The journey to Oz on the yellow brick road is told through a variety of props including yellow steps and chairs which give a feeling of movement along with the stage floor which is a giant turntable. Oz itself has some visual gags, green billboards with Oz puns in them, the residents of Oz voguing and Dorothy and the gang getting an Oz makeover complete with traditional Dorothy costume.

This was a wonderful treat for the whole family. The audience sing and dance, laugh and shiver with fear with Dorothy every step of the yellow brick road. The girls came out and said they wanted to go and see it again straight away. We sang We’re Off to See the Wizard! the whole way home.

You can see The Wizard of Oz at The Birmingham Rep Theatre until the 13th January. Prices from £15.

Disclaimer: We were given tickets to see the show for the purposes of this review.