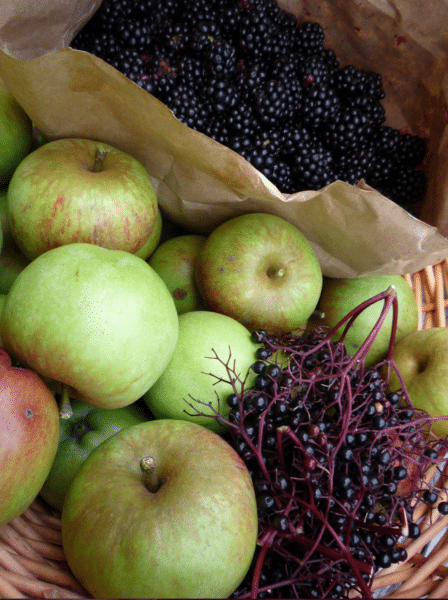 From baked goods to savoury chutneys and recipes resplendent with cider, the humble apple deserves pride of place. It’s been a bumper year for British fruit, and now’s the time to make the most of all the appley goodness on offer.

Apple Recipes To Celebrate The Season

Loving apples in all their splendid forms, I’ve compiled a list of my favourite ways to cook, bake and preserve the ruby-tinted, yellow-tinged or green-hued glories.

So what are you waiting for? Get picking!

What could possibly be better on a blustery, autumn afternoon than a thick slice of gooey apple cake and a cup of tea? Serve it hot, serve it cold, bake it and freeze it for another day – however you make it, it’s oh so right.

No hedgerow? No problem! Despite its name, this versatile jam can be made with any assortment of fruit and berries, whether they’re foraged from the wild, plucked from the garden or picked up from the shop. It’s basically an apple spread with the added kick of whatever wild fruit is handy – blackberries, sloes or whatnot – and it’s an easy, fail-safe preserve that tops your toast with autumn goodness all year round.

Few desserts could be quicker, simpler or more satisfying than a spongey Eve’s Pudding hiding a goldmine of Golden Delicious (or Bramley or whatever’s your favourite apple for baking.) Chop enough apples to make a good layer in the bottom of an oven-proof casserole dish, give a squeeze of lemon, a dash of sugar and spoon on the cakey topping, baking it until it puffs up and soaks in the fruit juices. Heaven on a plate.

Better known in the UK as Apple Crumble. Best served hot with vanilla ice cream or, if you prefer, custard. Sift together 1 teacup each of flour, oatmeal and brown sugar and cut in 100g of cold butter until the mixture resembles bread crumbs. Peel, core and chop or slice 4-6 apples, tip into a deep ovenproof dish, give a squeeze of lemon juice, 1 tablespoon of cinnamon, 2 tablespoons of flour, 3 tablespoons of white sugar and a pinch each of ground nutmeg and cloves. Mix until apples are coated and top with the crumble mixture, smooth over and bake uncovered at 180 degrees for 45 minutes to an hour. Thank me later.

These two are a match made in heaven. First find your favourite local bottle – I’m partial to Aspall, which is even nicer to swig, and the producer also makes vinegars that create a piquantly appealing apple chutney. Swish the cider around a hot pan with a little butter, add your chicken and simmer it until the rest of the liquid cooks into a saucy sweet concoction and your chicken (and whatever else you add – slices of apple, bacon, etc.) is ready to serve up. Extra nice with wild rice.

Coming as I do from America, where apple pie is the undisputed queen of the kitchen, I’ve been delighted by Britain’s many regional apple specialties. I hope you agree, and please share if I’ve missed your favourite!