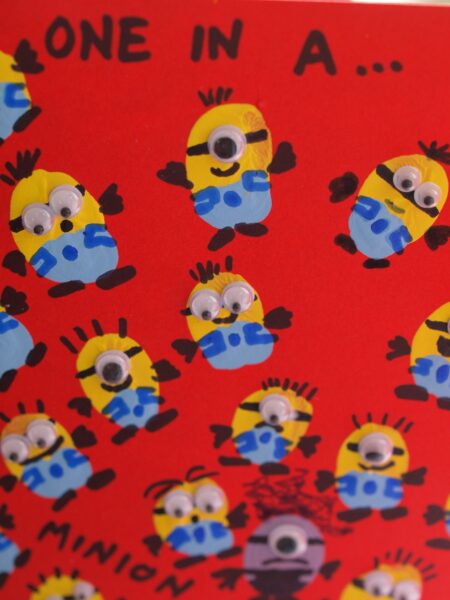 We had a long weekend for the Bank Holiday and I thought it might be a good idea if we made some cards for all the birthdays we have coming up. As the girls all love Minions it was the obvious choice for card making. I thought we could make Minions really easily with fingerprints. this is a great technique for little ones as they can do it themselves.

We used red cardstock for the background as that went really well with the colours of the Minions and made them stand out. We used yellow and blue paint and purple for the evil Minion. I used acrylic paint as that was a bit stronger and would stand out well on the red. It is a bit harder to wash off though so younger children may need hep. We also used googly eyes and felt tip pens for the details.

First we used our fingers to print lots of yellow Minions and one purple one. Then using a smaller finger we printed the trousers in blue on the bottom half of the Minion.

Once the paint had dried we added the details with the pen and stuck on googly eyes. We used a match stick to put the glue on the eyes as they were quite tiny.

You have two choices with these. If you want the finished product to look perfect then you can do the faces yourself. If you want the card to be the children’s own work then let them do it themselves. I like a Pinterest perfect card occasionally, but it’s the children’s own versions that will be treasured. I love the way the girls decorated their Minions. They may not look exactly like the ones in the film, but they look so cute.

As you can see one of the twins painted half her Minions blue and the other half yellow. Her card is also back to front, but that is part of the charm.

This would be a lovely project for an older child who would enjoy giving the Minions distinctive features.

We finished with the pun “One in a Minion.”