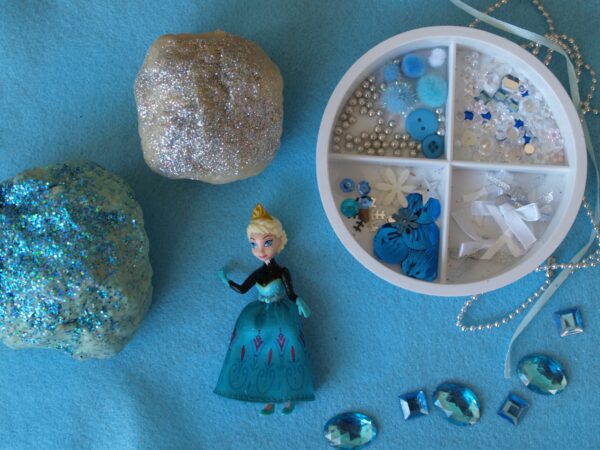 The girls loved the part of the film where Elsa transforms into a snow Queen. I thought some sparkly blue play dough would work well. They could make Elsa a beautiful snow Queen dress.

I had Sleeping Beauty help me make the play dough. She was rather trigger happy with the glitter but other than that did a good job.

We made some blue play dough using blue food colouring and a looooooooot of glitter.

We also made some white play dough and added silver glitter.

For decoration we used:

The other girls were poorly and this was a great activity to keep Rose busy as we were stuck inside.

We made this play dough at the weekend and the girls have played with it for at least an hour each day. I know a lot of people don’t like play dough because of the mess but really five minutes tidying up afterwards is worth it for the hour of peace and quiet it gives you.

I used a chopping board covered in tin foil for the girls to do the play dough on. This looks cold and icy and has the added advantage that you can throw it away with all the little bits in one go.

Rose had to have her own transformation and decided to change into her Anna costume.

The play dough also makes a lovely bed for sleep overs with the other princesses too.

We also added some dark blue glitter to one ball of play dough and this made a slightly darker dress.

To go with this we have been making a cardboard ice palace for the girls to play with. It’s almost dry and then I can show you how it’s turned out.

We also used our letter cookie cutters to make letters to spell out Frozen.