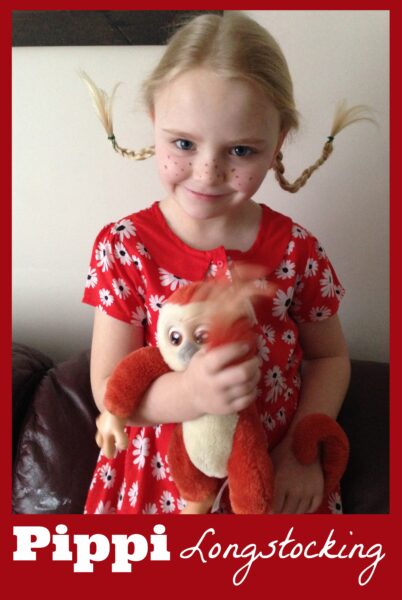 For World Book Day Molly wanted to dress as Pippi Longstocking. We read the book by Astrid Lindgren before Christmas and she really loved the story of Pippi, a feisty girl who doesn’t have any parents. It was a favourite of mine when I was growing up so it was lovely to share it with her.

We did a trial of the costume the night before World Book day and everyone guessed straight away who she was dressed as. She was a bit disappointed that no one except one teacher knew who she was on the day.

This was such a great costume to do as it is really easy and you might even have all the things for it at home already. We used the drawings from Lauren Child as that was the version we had read. In one picture Pippi was wearing a red dress and I was delighted when I found a really similar dress in Matalan. The good thing is she can wear this again in the summer and it only cost £10.

Pippi alwasy wears mismatched socks, one of the signs she doesn’t live with her parents. I bought two pairs of ladies stripy socks which were really large and she wore one of each.

To finish off the costume I made Pippi’s recognisable plaits. I used a piece of garden wire and wrapped it round her hair to form bunches, then just made plaits keeping the wire inside the hair so you couldn’t see it. I was surprised how easy it was. At the end I used the wire as a hair band. After that you could bend it into crazy shapes. I added a few freckles to her nose using an eyebrow pencil and she took in her sister’s monkey for Mr Nilson.

Disclaimer: I was given a voucher to buy a costume for World Book Day

Here’s Our Other Costume Ideas for World Book Day