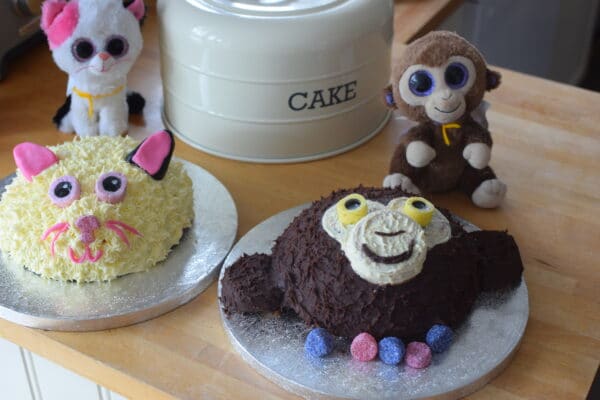 Our house is full of small furry creatures with slightly creepy giant eyes. All three girls love beanie Ty Beanie Boos and avidly collect them so we have rather a lot in the house. It was obvious that the twins both love a Beanie Boo birthday cake for their birthday. One loves cats and the other loves monkeys so I decided to make them a cake each based on their favourite toys. It actually turned out to be a really simple cake to make and they loved the end result.

As I was making two cakes I made a large batch of cake mix using this Disney Frozen Birthday cake recipe.  Then I halved it putting cocoa powder and a teaspoon of orange essence and some grated orange zest into one to make a chocolate orange cake for the monkey. The other I added a teaspoon of vanilla essence into the other.  I baked these in a half sphere cake tin but you could use a circular cake tin and it would still look great. I then used a muffin tin and made 4 small circles of cake for the ears and nose of the monkey and the nose of the cat.

What You Will Need To Make A Monkey Beanie Boo Cake

How To Make A Beanie Boo Money Birthday Cake

What You Will Need To Make A Beanie Boo Cat Cake

How To Make A Beanie Boo Cat Birthday Cake

The cat beanie Boo cake was slightly harder to decorate.

It was a lot quicker to decorate the cakes than I thought it would be. The liqourice allsorts made it look really realistic. I did try using a silver icing pen to make the eyes look a bit sparkly like a real beanie Boo but I don’t think it added much to the overall effect.

The finished cakes worked well for twins as they were a theme but also reflected their different personalities but you could easily make one cake on its own.

Summary: The Cakes Were delicious!

The cakes turned out so cute and the girls really loved them. We’ll definitely be making these again!

We love baking at HereComeTheGirls. Why take a look at our other baking ideas.